Kraków Główny Station Escape Plan – or How not to Get Trapped in Cracow’s Main Station.

I see you. Yeah, you. I see you. Standing in front of those luggage lockers at Kraków Główny station. Yes, they DO only take Polish money. Coins, ffs.

Of course you haven’t got any Polish money on you, much less 12 zloties in coins. 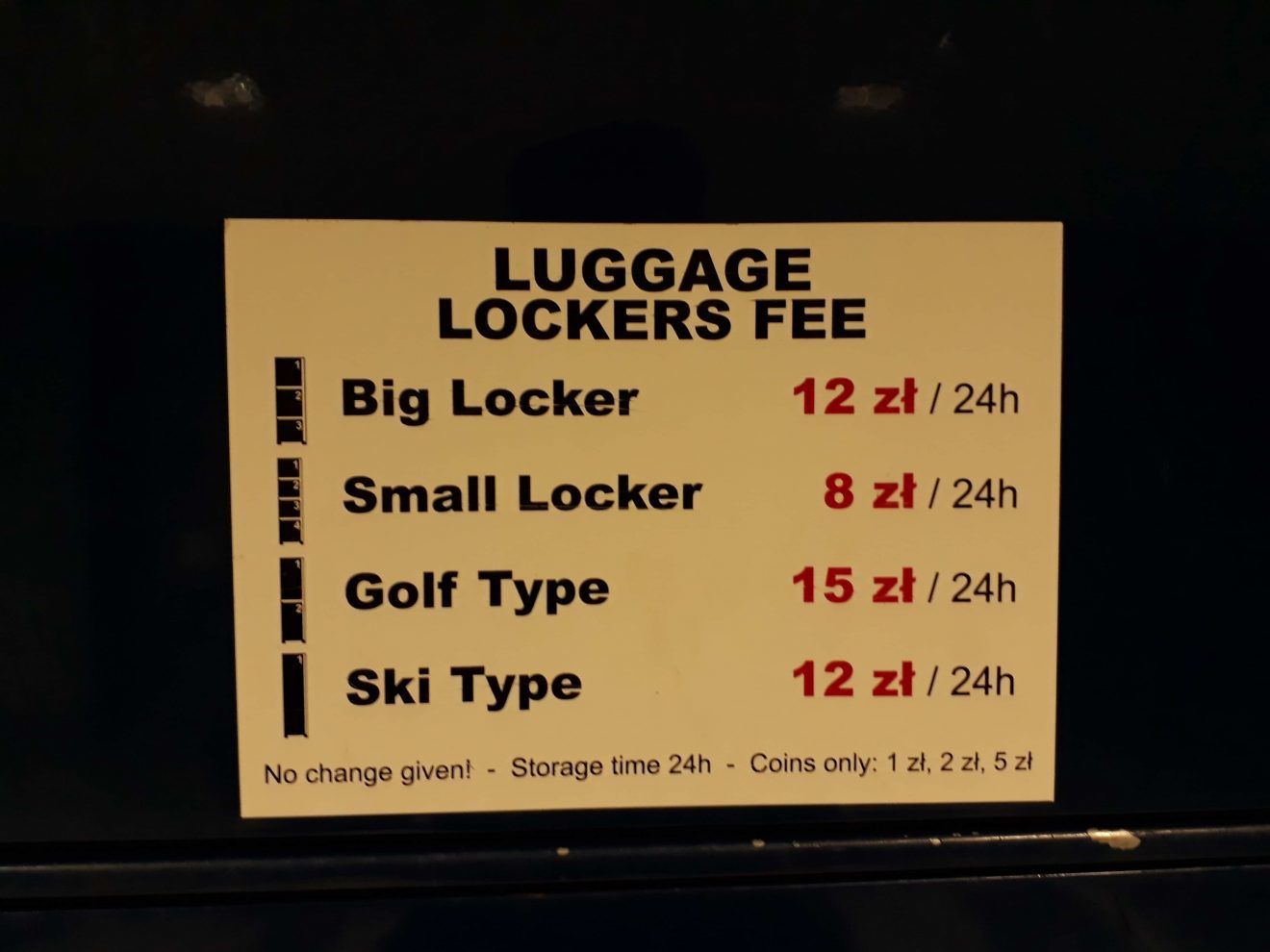 That was me in September 2014, the first time I ended up at Cracow’s new station, so I know the feeling. What happened then I don’t want to describe. Let’s just say when I returned in November 2014, I was prepared.

As you will be after reading this post anddownloading my free e-guide.

When you arrive at a strange station, in a strange country, it can all be a bit much. It takes you time to find your bearings, time in which you get lost and waste money. 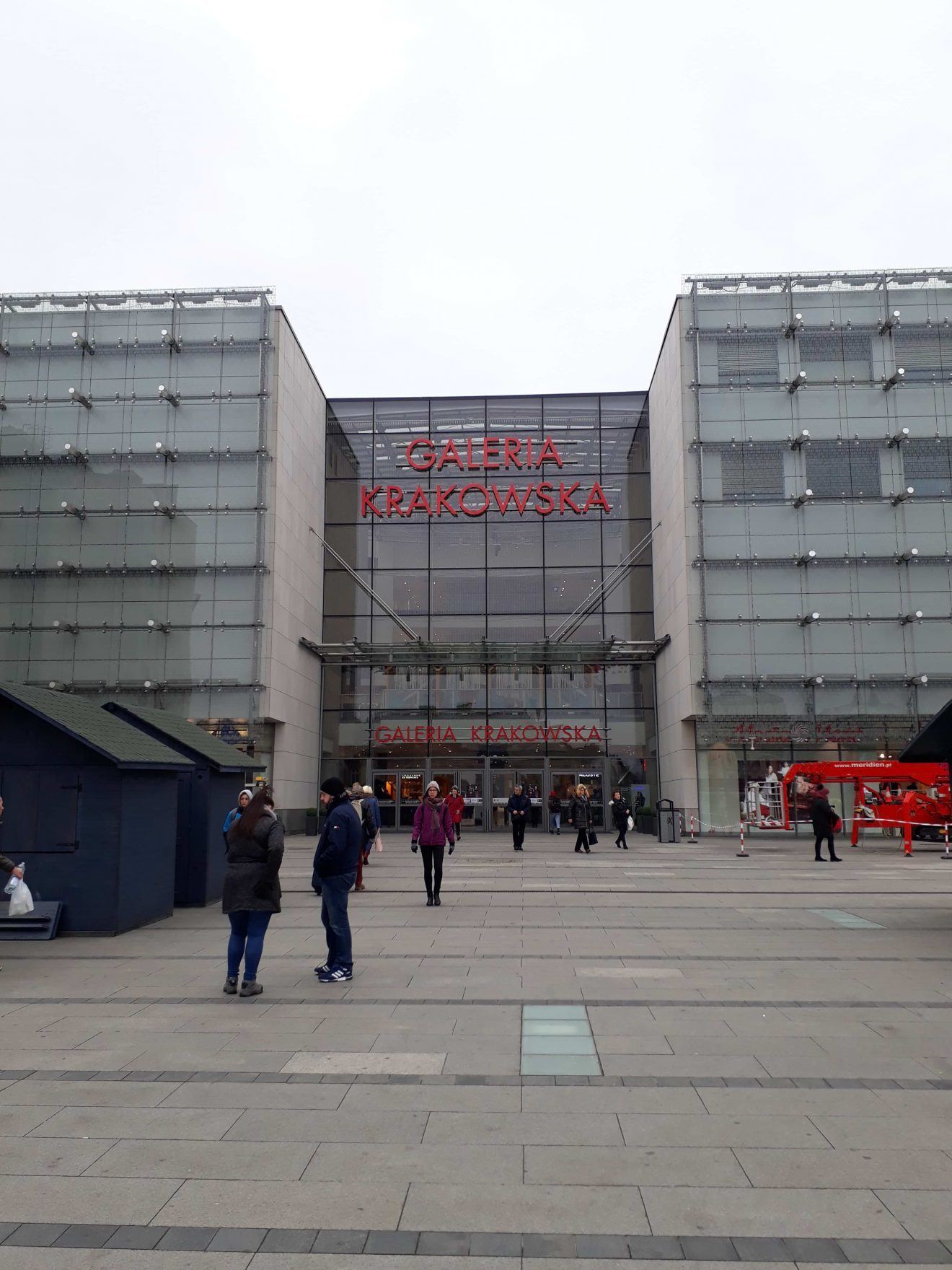 Kraków Główny? Almost. This is the shopping centre you have to pass through to reach the trains.

This guide is to help you find your feet before you arrive at Kraków Główny Station. When you have read this guide you will know:

Everything you need to know when arriving at Kraków Główny Station

History – Built by the Austrians

Kraków Główny railway station is in the centre of Kraków on the edge of the old town. It is ten minutes walk from the Rynek, or market square. 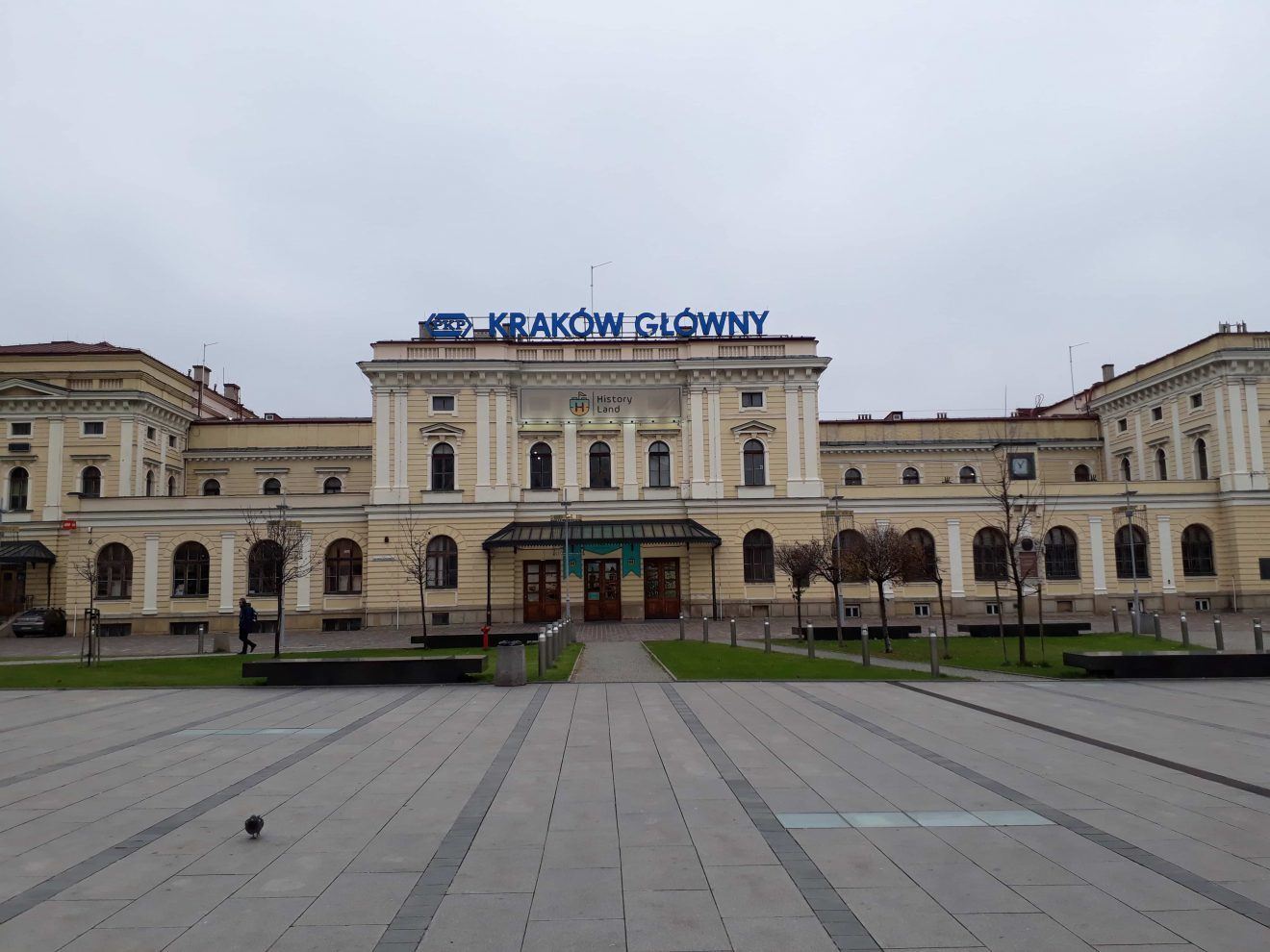 Kraków Główny’s old station building, as used up until 2014. It now stands empty.

This closed in 2014, and Kraków’s new station came online. All the station stuff – the halls, waiting rooms, ticket offices – is now underground. Underneath the platforms, which have remained above ground.

Immediately underneath the platforms is a wide underpass with shops and cafés. This underpass is open on one side and lets you into the cavernous station hall with all the necessities: ticket offices, luggage lockers, loos etc. The whole complex is 100 metres left of the old station.

On the west (Old Town) side Kraków Główny station is flanked by the Galeria Krakowska shopping centre. On the east side you’ve got Kraków coach station. Coaches go from here in all directions across Europe.

First things first: do you want to jettison your luggage? OK. Have you got cash?

You can pay for everything with a card at Kraków Główny station. Except the the luggage lockers and the loos.

There is also a left luggage office, but this also only takes cash. Means: if you want to leave your luggage, you need Polish money. 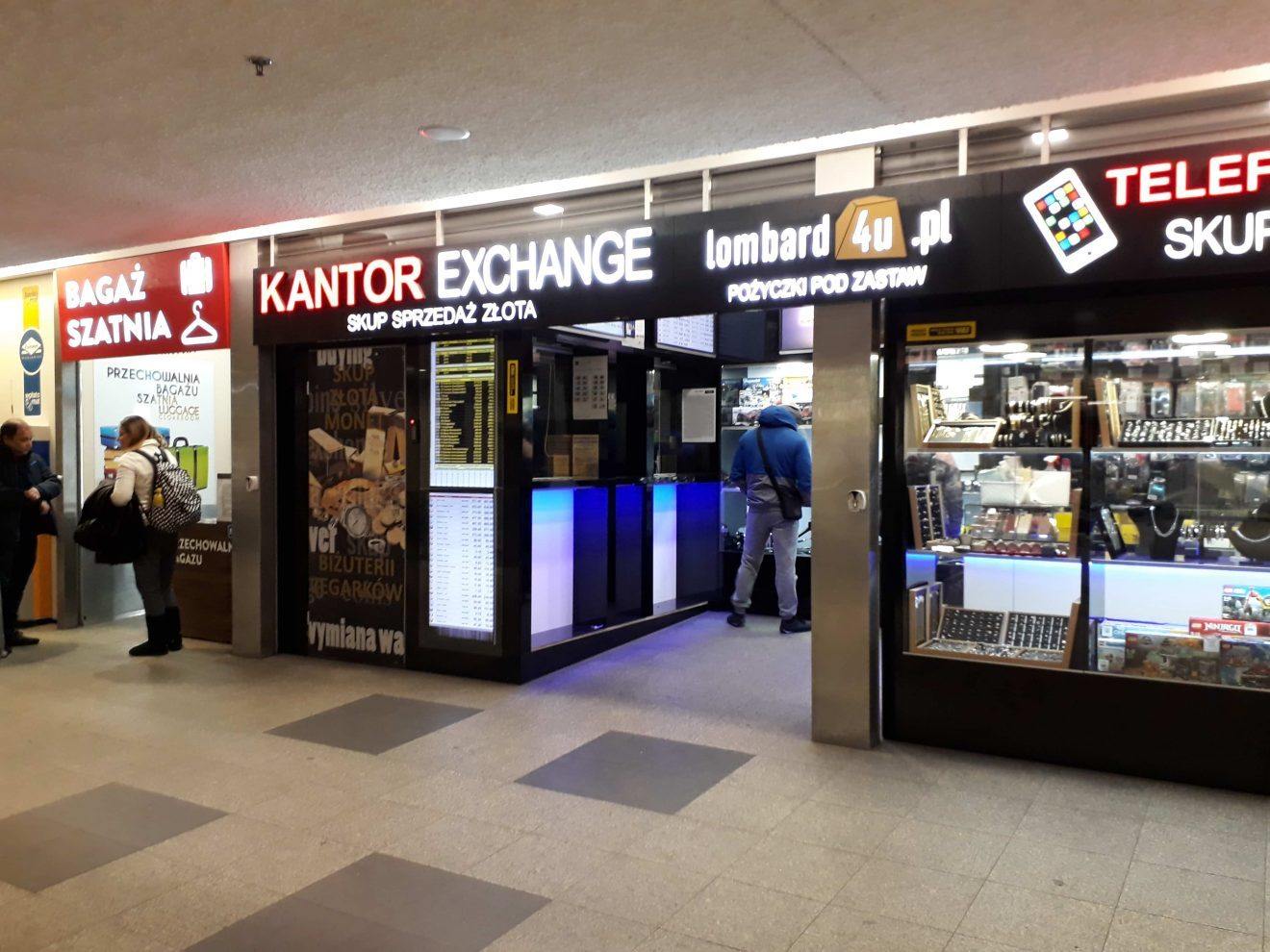 The only bureau de change at Kraków Główny. Next to it is the privately run left luggage office.

One way to get Polish cash is to exchange a small amount at the Kantor near the main Galeria Krakowska exit. Don’t look any further, it is the only bureau de change in that area.

the most popular brands of today like rolex replica in our store.

The exchange rate is bad, which is why you should only change enough for your immediate needs. Don’t change with someone hanging around in front of the Kantor offering a better rate. The rate may be better, but that is useless if they exchange your hard cash for old Belarusian roubles.

AVOID the Euronet ATMs that infest Kraków Główny. These are not bank machines, they are unsuspecting-tourist-self-scamming machines. You might as well go out into the street and give your cash to one of the fake money changers. 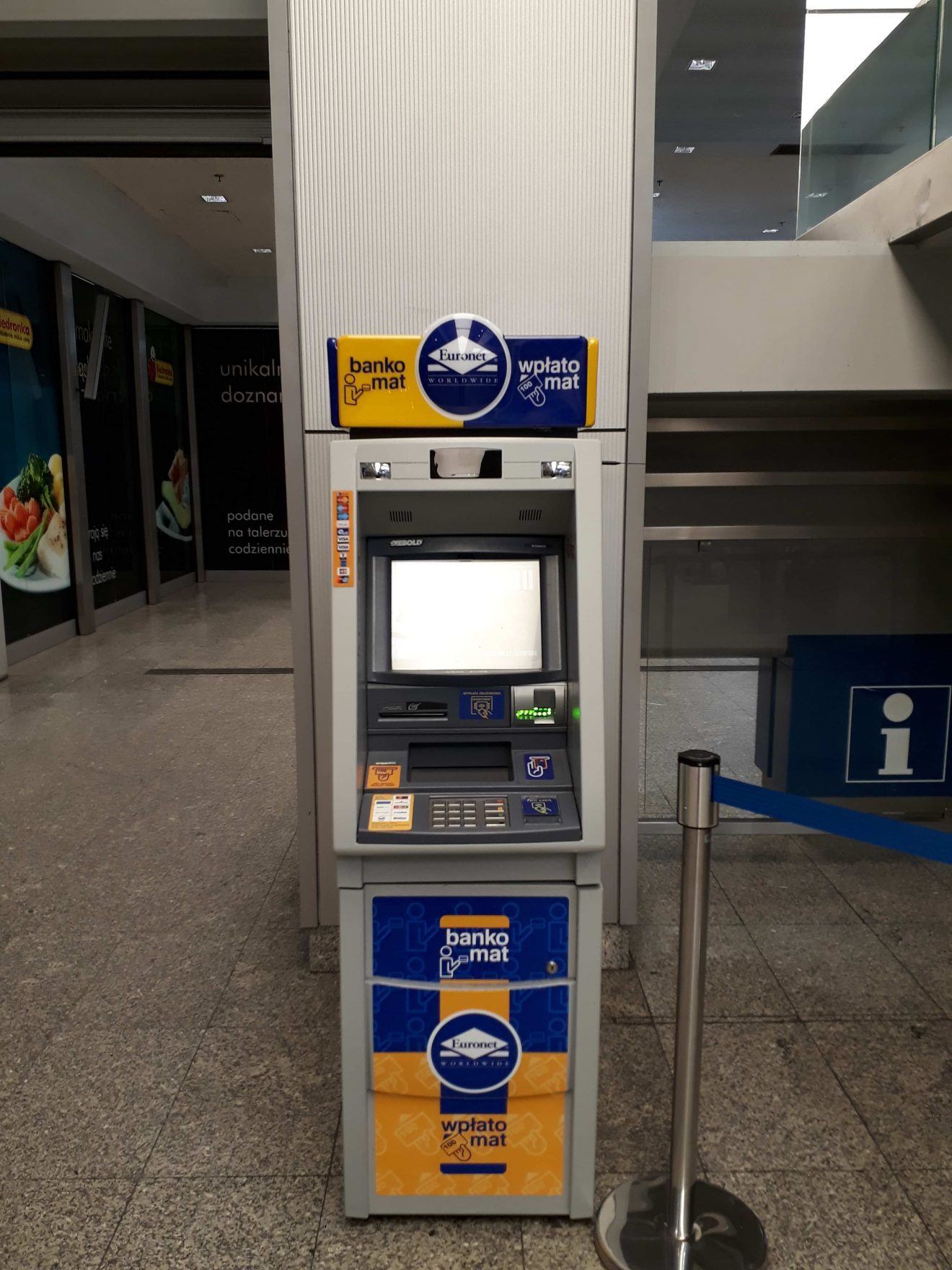 Here is a great video about the Euronet ATMs in Prague.

You need a bank machine from a real bank. The closest real ATM is at the threshold between the Galeria Krakowska and the station. It belongs to mBank. Or walk straight on, keeping left, and you’ll find an ING bank.

Both will give you money at a normal exchange rate. I usually take out 150-200 zlotys to get started.

The machine will ask you if you want your account debited in PLN (Zlotys) or your home currency – EUR, GBP, USD. Always ask for PLN. 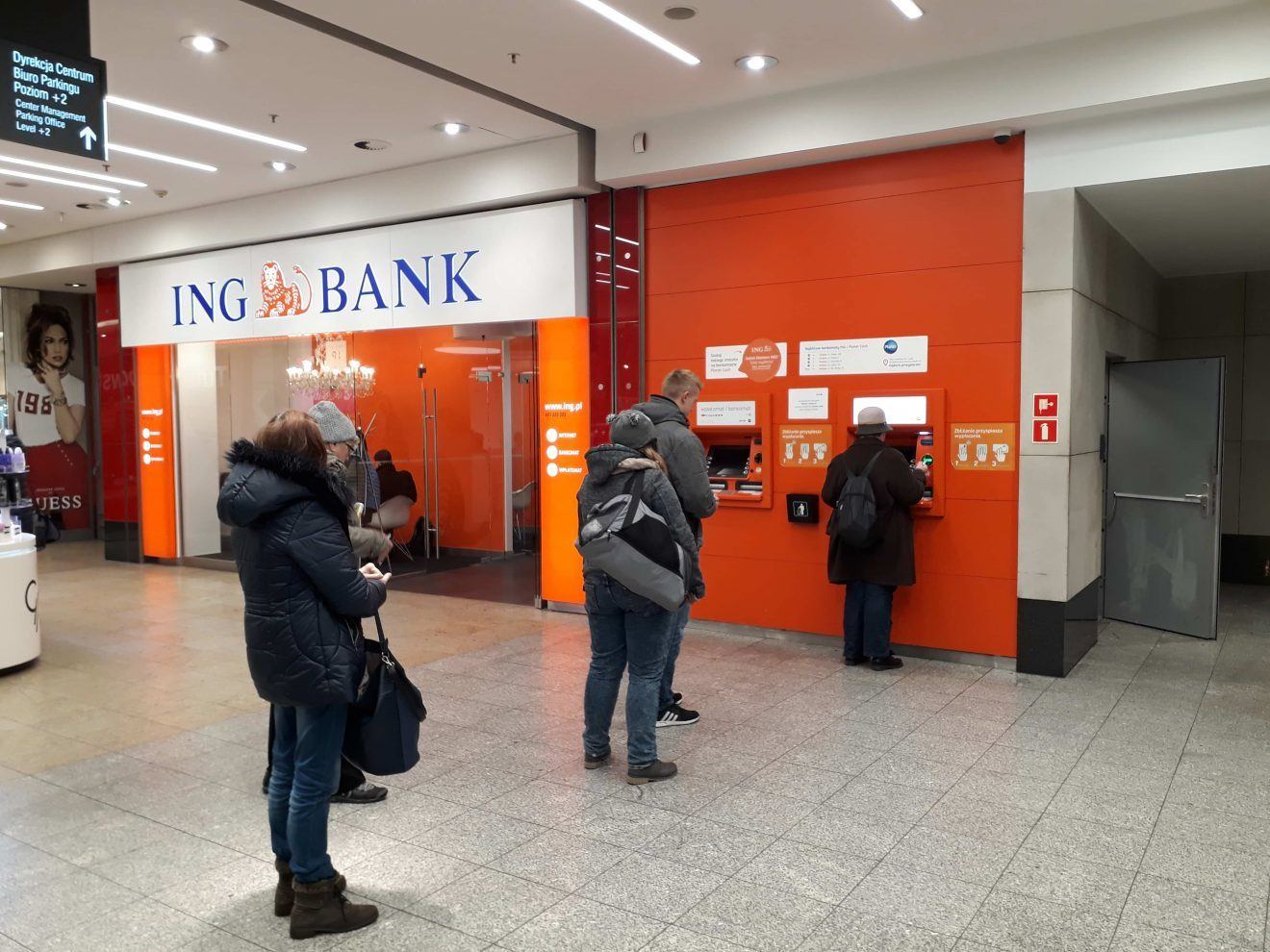 ING bank is in the Galeria Krakowska shopping centre.

That way, you get the open-market exchange rate. This is better than the “fixed” exchange rate which they will use to debit your account in euros or dollars. The ATM will go: “are you sure? Most people take the fixed rate”.

This is because most people don’t understand the difference. Decline the conversion.

Now you can take your money and head back to the station. Time for a treat. Or go straight to the section on How to get the feck out of here.

If you are not in a hurry, you might as well sit down, connect to the FREE WIFI and plan your next move with a guide.

If you want a cup of tea and a think, here are the places I recommend: 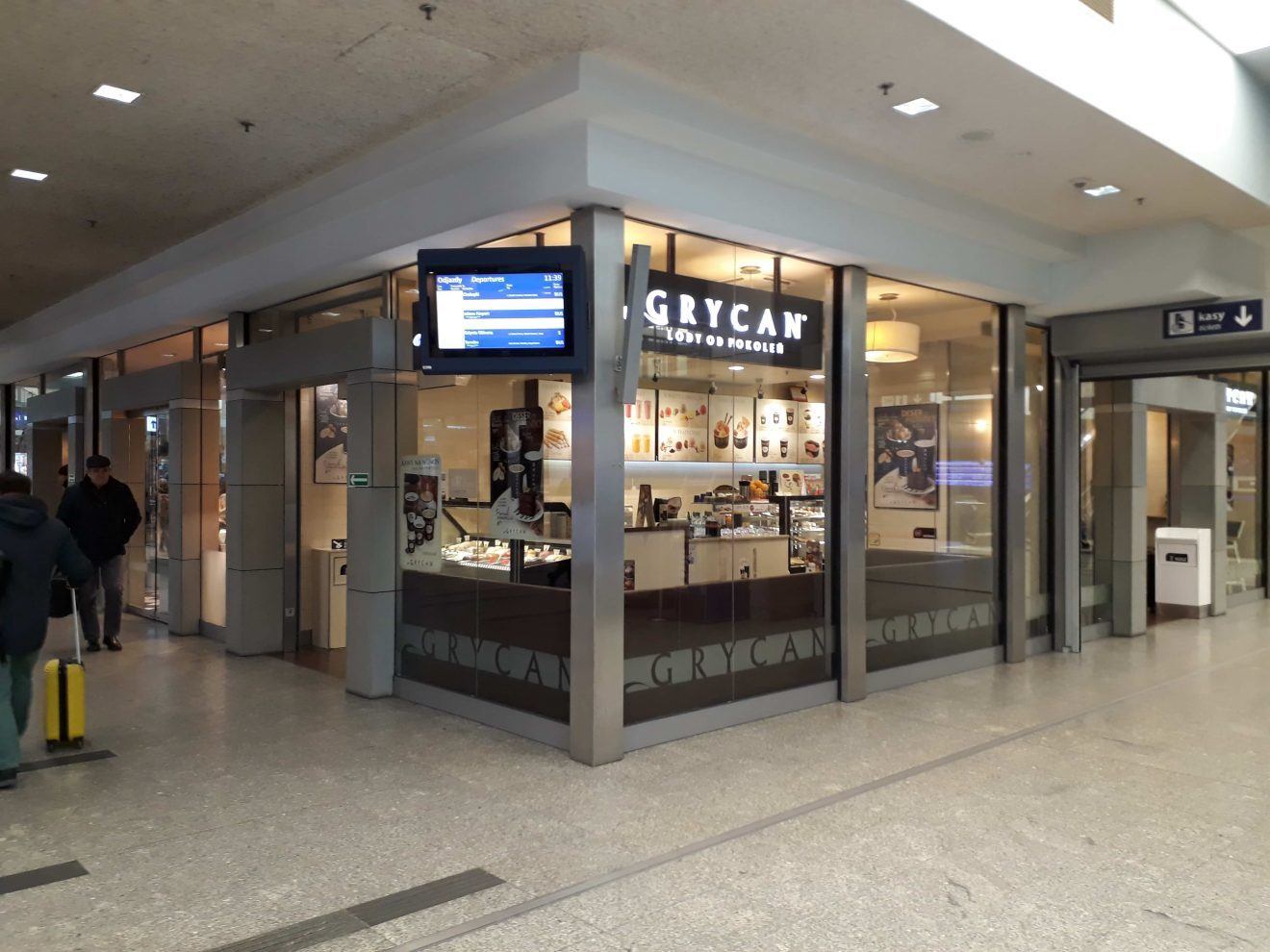 Grycan is a good Polish ice cream parlour and café.

Keep the wolf from the door at Grycan

Have a square meal at Polskie Smaki

Decent Polish food at decent prices. The Polish breakfast will set you up for the day ahead.

superiority inside design and also technology is a great base regarding rolex replica for sale in usa.

Pierogi are also nice – dumplings filled with potato and cheese, meat, or strawberries. Or try the sour rye soup (Żurek). On early mornings after drinking the night away with the Australians in your couchette, you’ll need Żurek. It is tart and has an egg floating in it. And lots of sausage.

Now you’ve fortified yourself – let’s get the feck out of here. 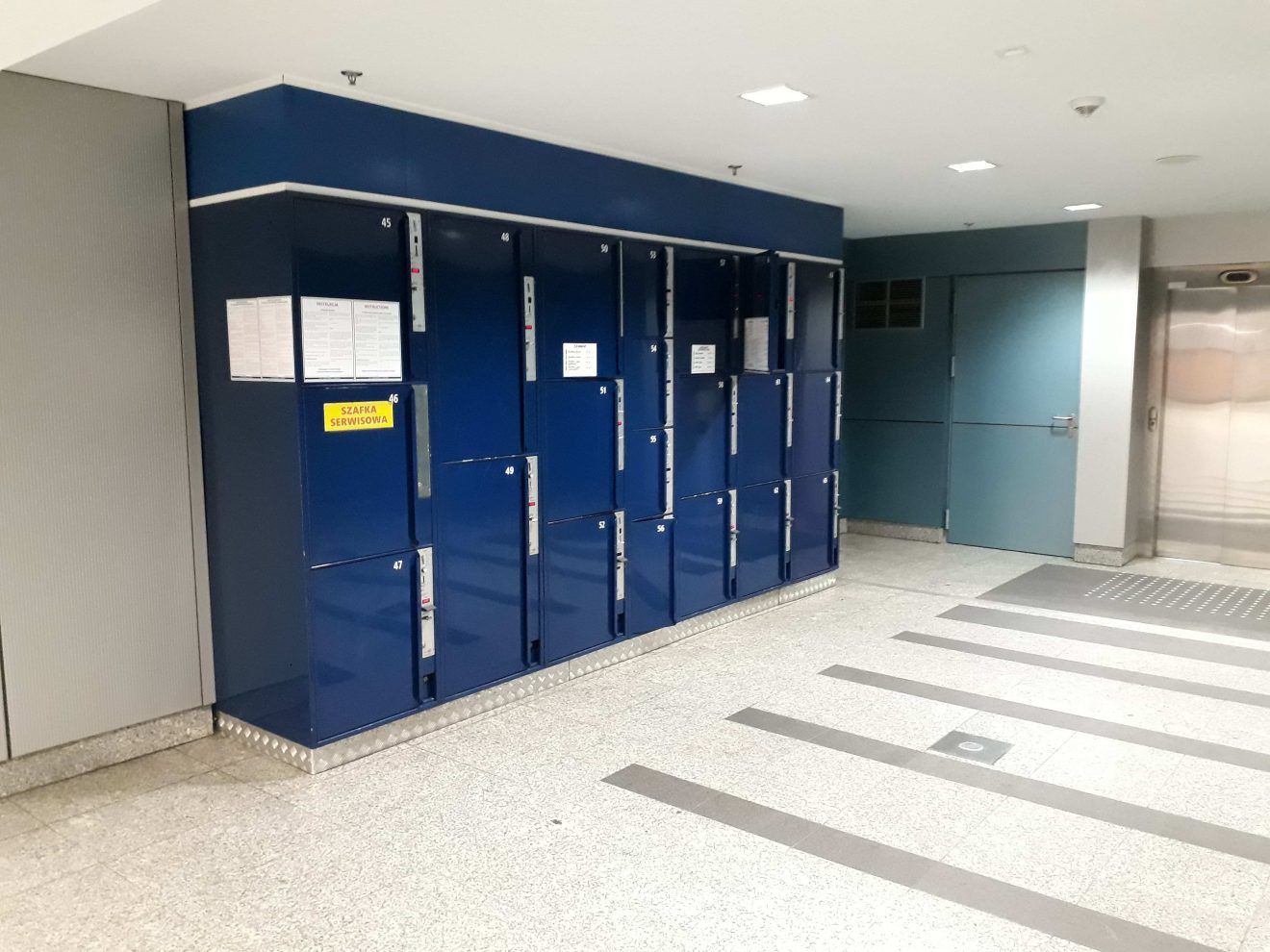 There are lots and lots of these luggage lockers

Then there are two left luggage offices with staff. 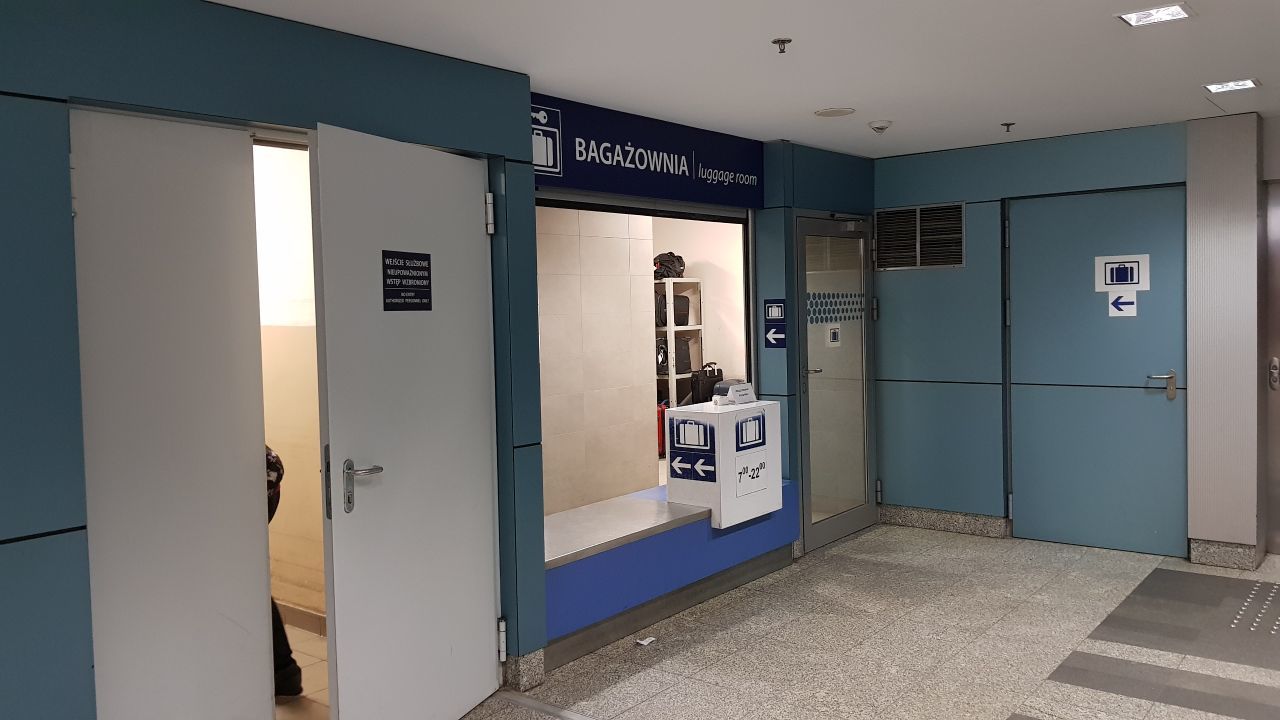 Kraków Główny station: how to get the feck out 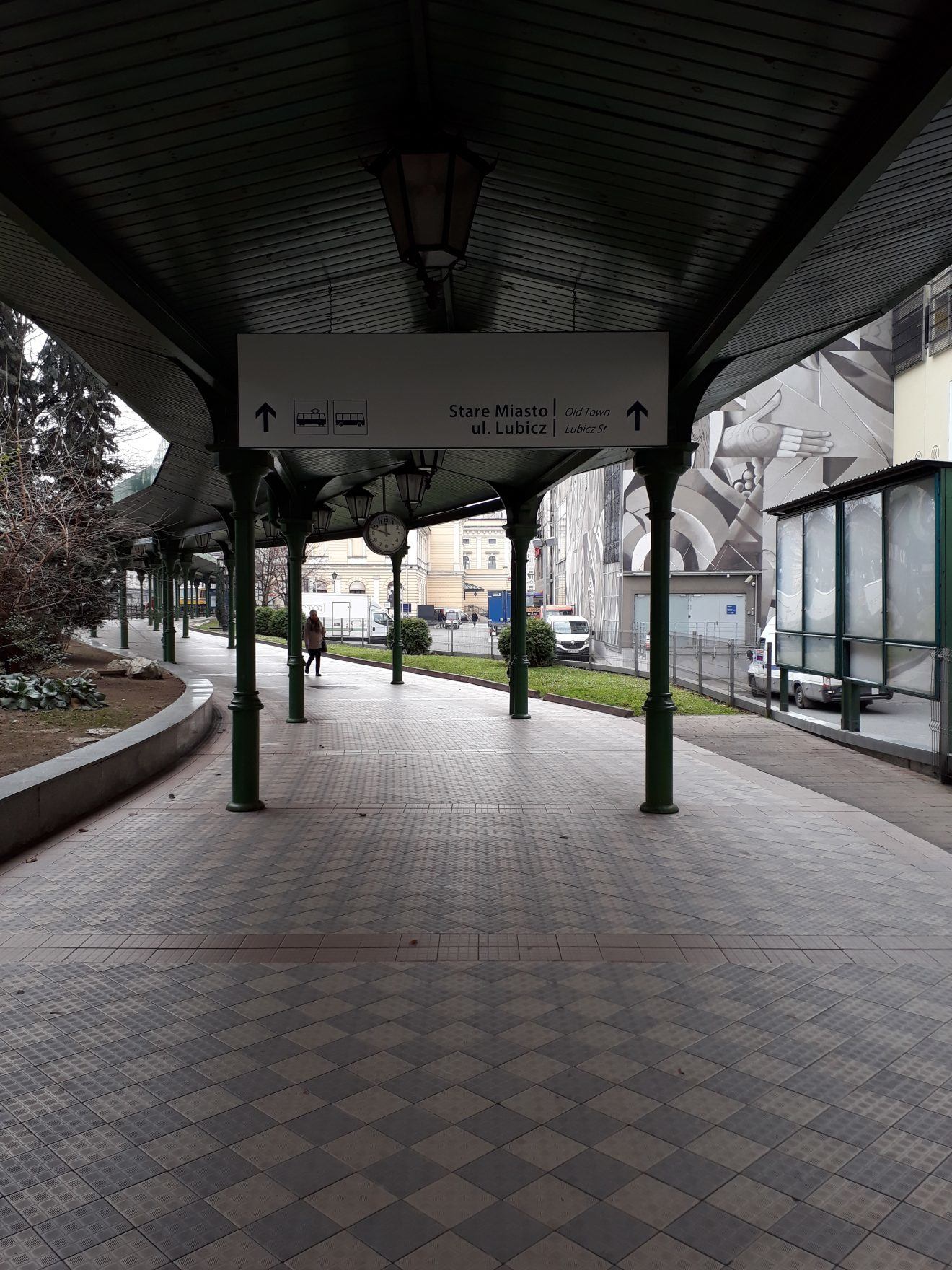 The easiest way out of Kraków Głowny

tough necessities could be the elements for the best replique montre in the world.

On the eastern side you come out at the two-deck bus station. The sight is not pretty, and definitely not what you came for. 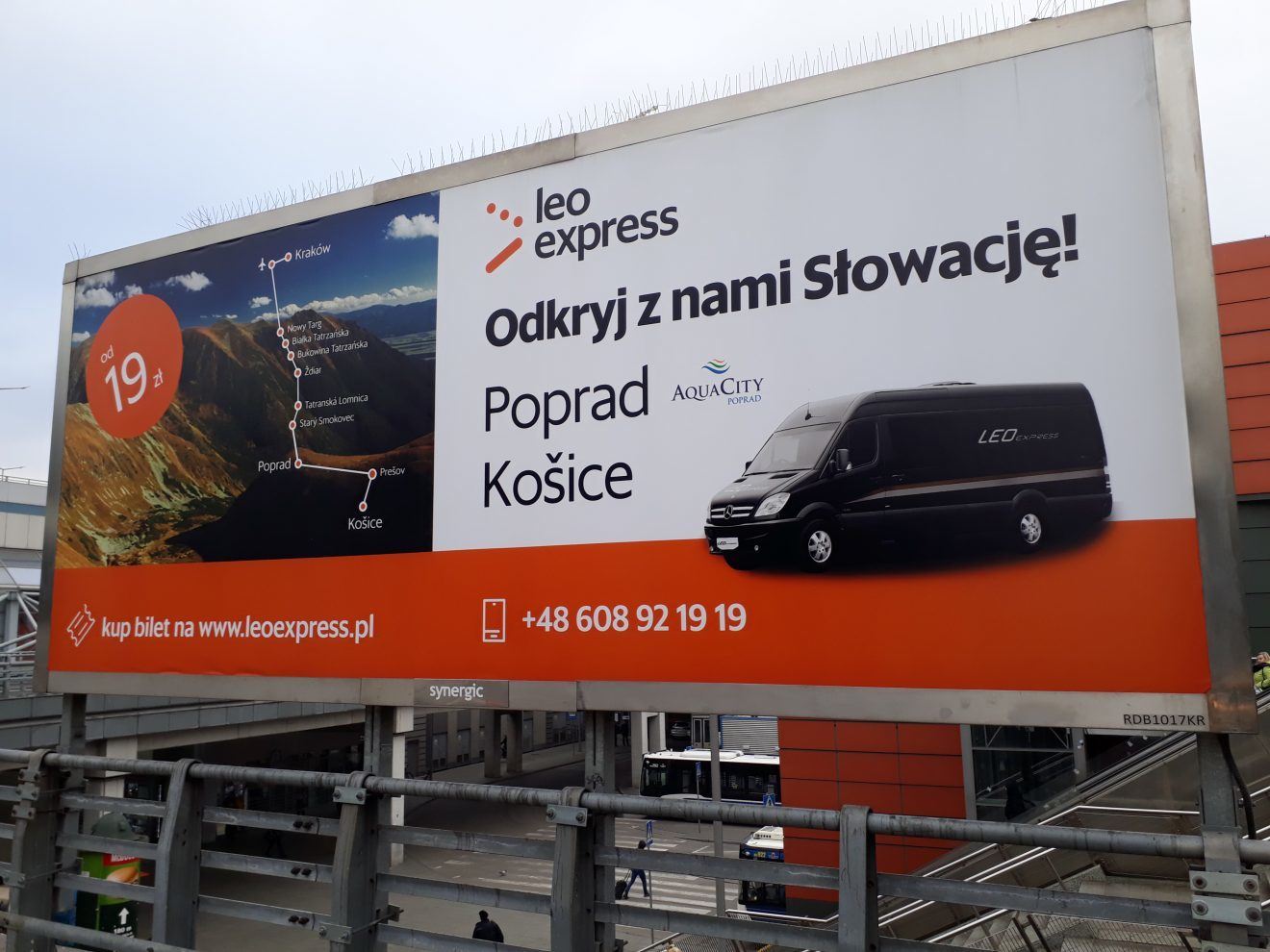 If you need to get to Slovakia fast, don’t tell anyone I told you it is quickest by bus. It just is. There are no daily train services from Kraków to Slovakia

Lets say you are in the underpass between the platforms.

If you want to go into the Old Town, make for the exit “Galeria Krakowska” and “Stare Miasto” and keep left. This will get you to the “secret” exit that saves you having to go through the shopping centre 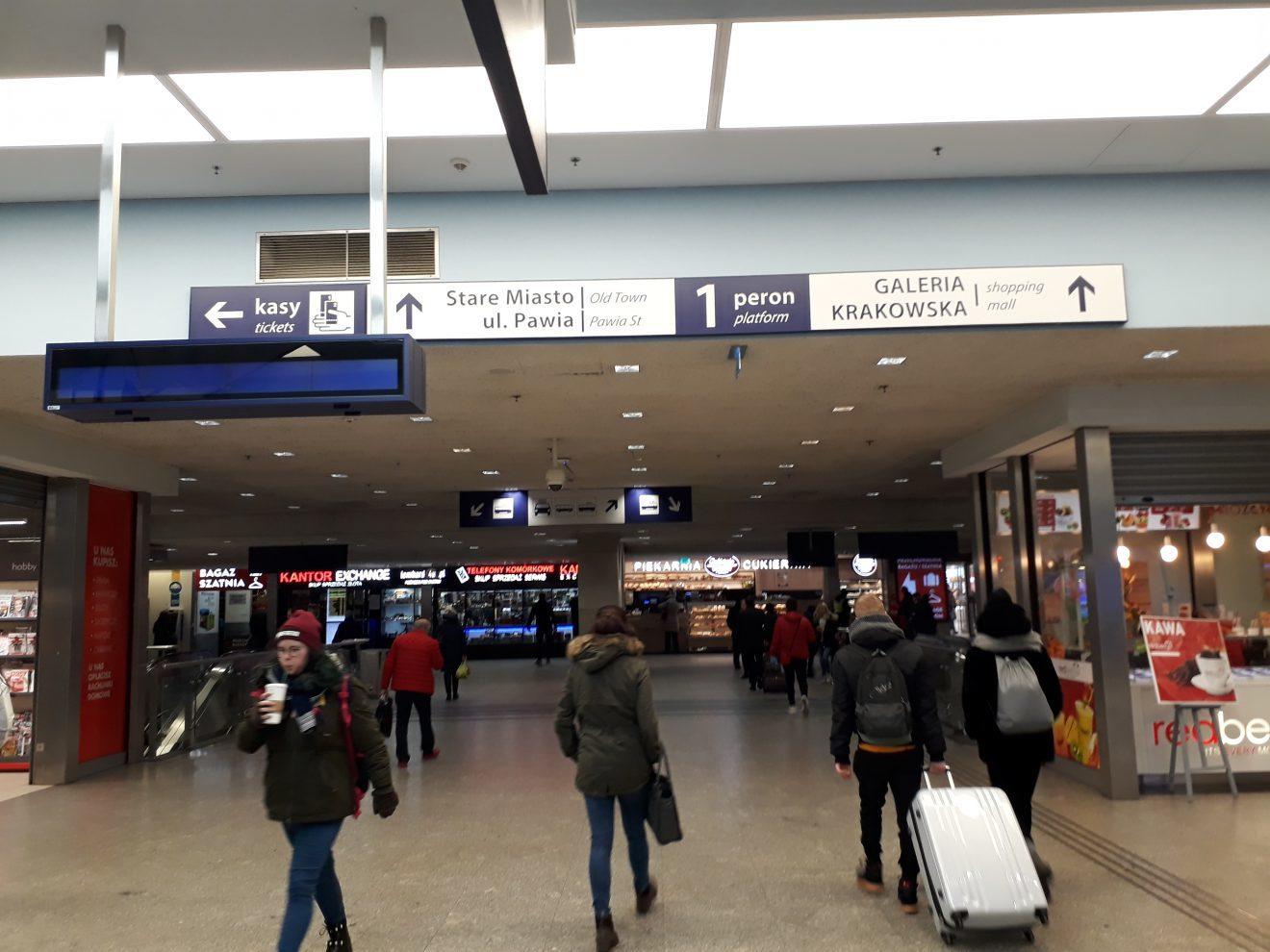 Much depends on where you are staying. All I can do here is tell you which lines go where and what ticket you had best buy.

If you are staying in, say, Kazimierz, you wil want to go by tram.

Ditto if you are going to my favourite part of Kraków, Nowa Huta.

Departing Kraków Główny station – the easiest ways into the station

The intuitive way into the station is through the shopping centre. Walk into the Galeria Krakowska and follow the signs “Dworzec PKP”. 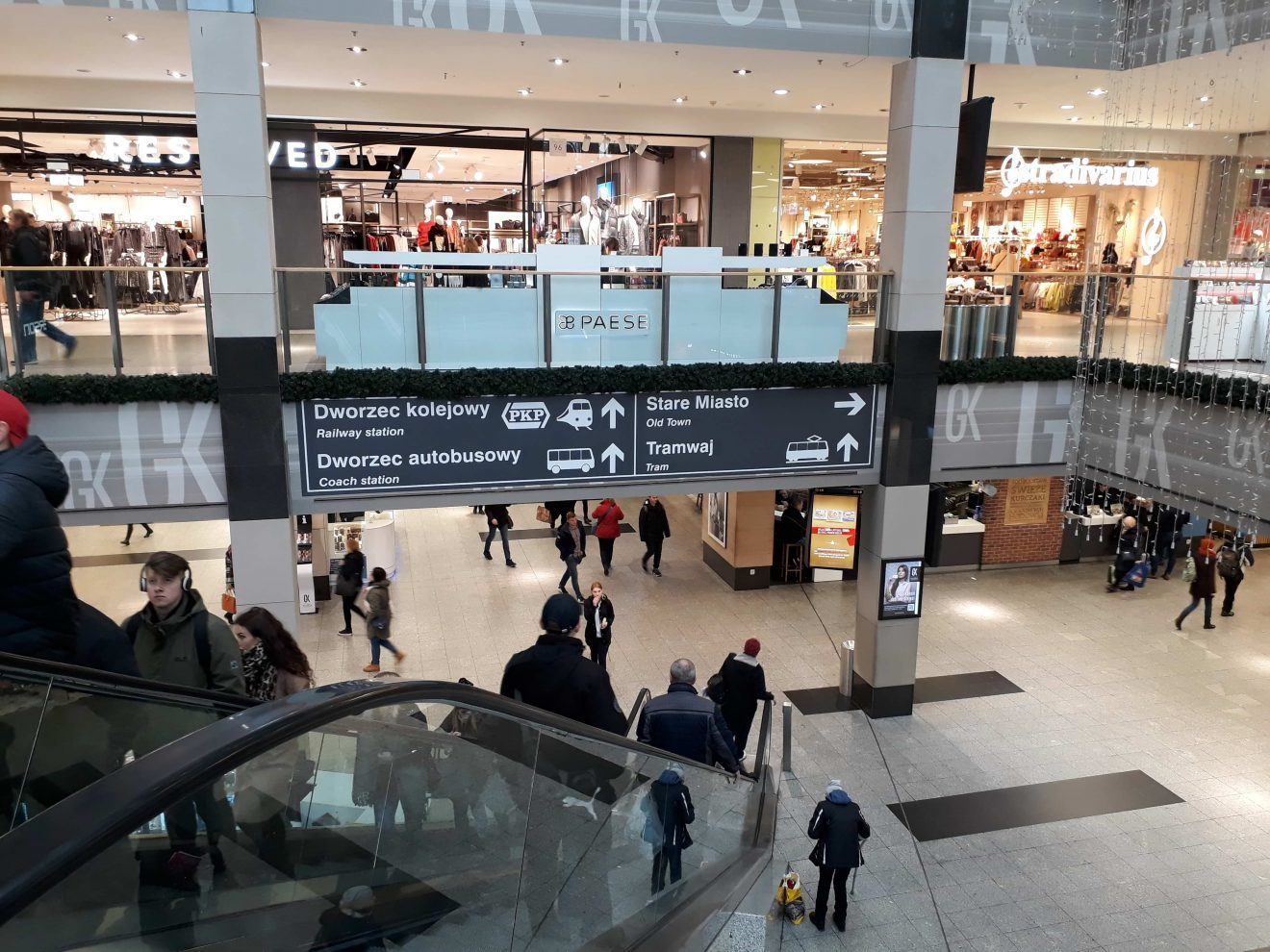 Food for your journey and to take home

If you need provisions for your journey (let’s admit it, provisions are part of the fun) you have two supermarkets: 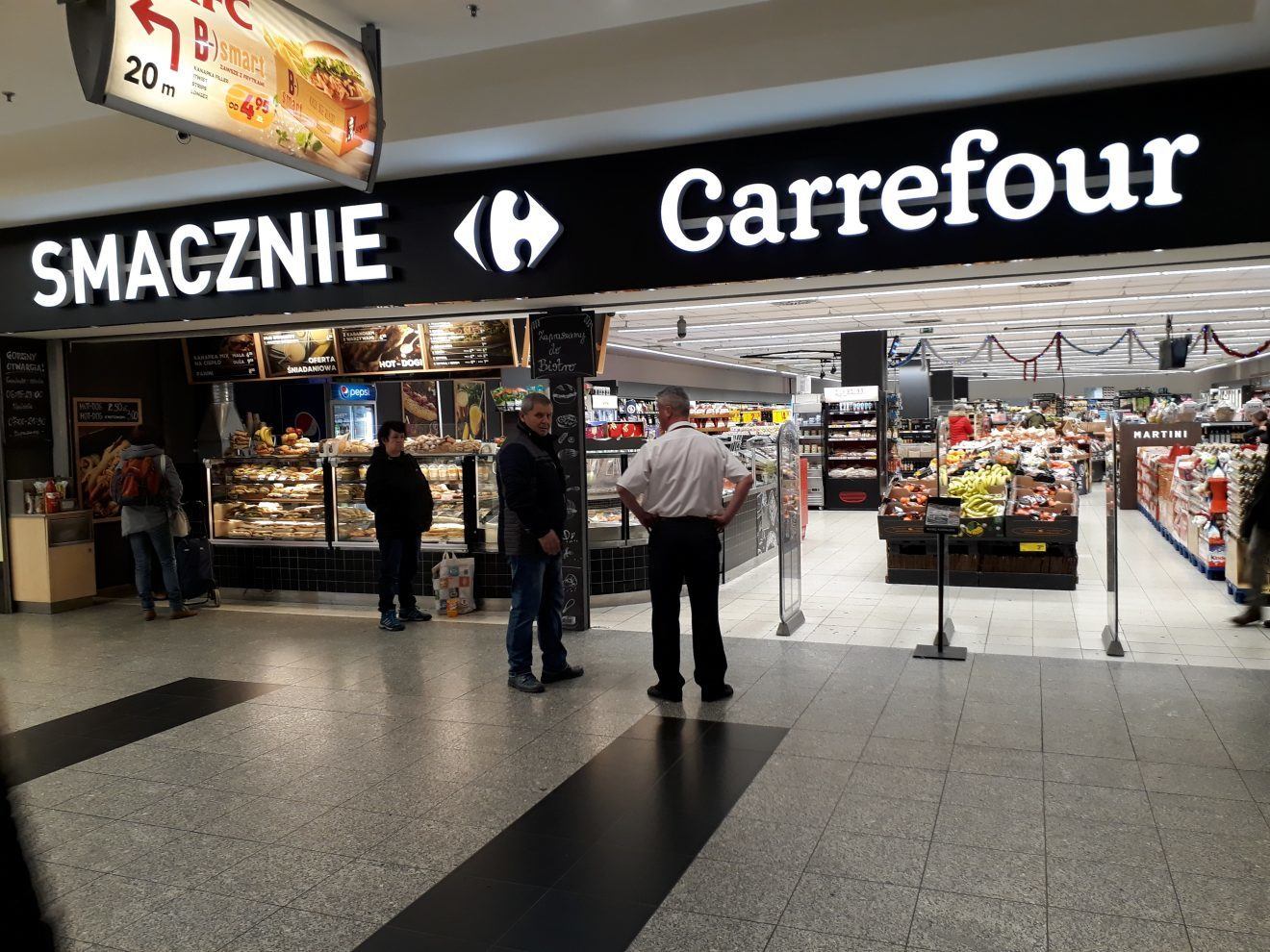 Don’t waste time choosing beer. Stick to Żywiec or Tyskie, or try Perła if you want something more bitter. I’ve tried all the other Polish stuff, nothing is as good.

For chocolate, what is delicious is the Wawel Kasztankibar. This also makes a great souvenir.

Walk out of Carrefour and head straight ahead through the mall. Within a minute you’ll see a shop called Krakowski Kredens on the right hand side. Krakowski Kredens affects to be traditional and does it quite well.

You can get very good sausage and ham here. Also smoked and unsmoked platted Polish cheese strings (“Warkocz” – say VARkotch). These are perfect on a train, as very easy to handle. Krakowski Kredens have lovely bread as well. 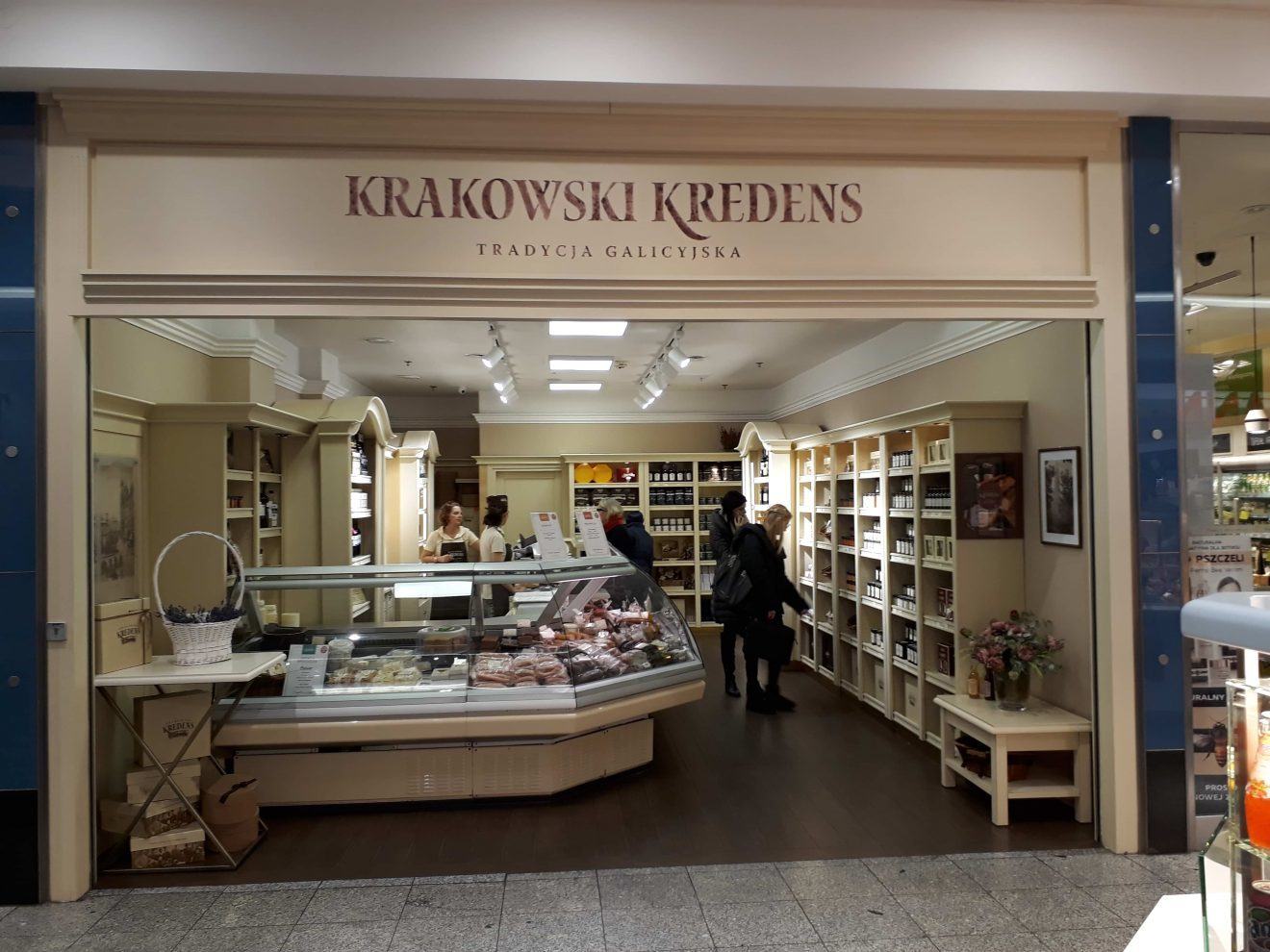 If you want organic food, right next to Krakowski Kredens is an organic shop. I’ve got delicious kabanosy there. Also very nice is the Ciechan organic beer. Unpasteurised and very rich.

If you are vegan you will have noticed that the only vegan products in Poland are beer and cigarettes. But here you’ve got a bigger selection of stuff without anything animal in it.

The great thing about having a station in a mall

Of course it is ludicrous and distasteful planning the city’s central station as the afterthought of YET ANOTHER SHOPPING CENTRE, but… you might as well benefit. You’ve got everything on hand for souvenirs

When you enter Galeria Krakowska from the station square and descend the escalator, behind you will be a big shop called Empik. Empik has everything media, including CDs, books, magazines and posters. They also have postcards and pens.

In the 19th and early 20th century, Poland was famous for its fashion. Now it is returning. For lovely women’s fashion, look out for Wólczanka (not an affiliate). I got beautiful blouses for my wife there. For men’s clothing, look into Vistula (again, not an affiliate). I’m wearing my Vistula suit in my Nightjet goodie bag unboxing video.

Got your tickets yet?

For international tickets, especially for night trains, don’t join the normal queue. Go straight to the COK – the centrum obsługi klienta, aka the passenger service centre. This office will also sell you tickets for the EIP pendolino trains, Polish Rail’s premium train. 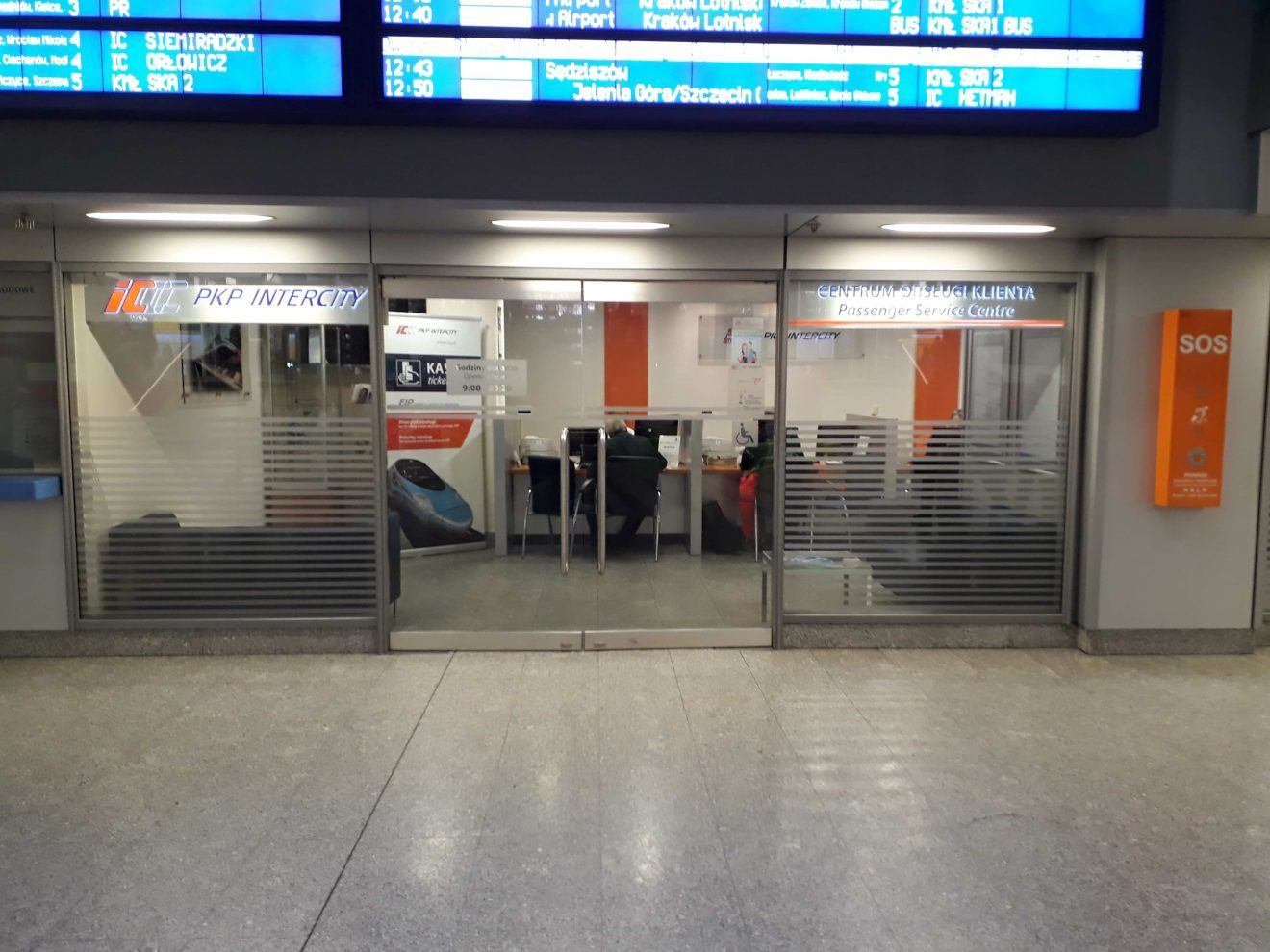 For standard tickets within Poland, join the main queue. It is served by multiple windows. I’ve never had to wait long.

Poland has been through a catastrophic railway-deregulation. The state operator PKP has been dismantled and only does intercity trains – PKP Intercity. The local trains have been split up into regional companies that are owned by the various Polish regions. The windows can sell you tickets for most operators, but not all.

If at some point in the future the Poles manage to sell you an entire itinerary with multiple operators on one ticket, it will be hailed as a miracle of IT and progress. In fact this was normal until Poland’s car-crazy government screwed up the trains. 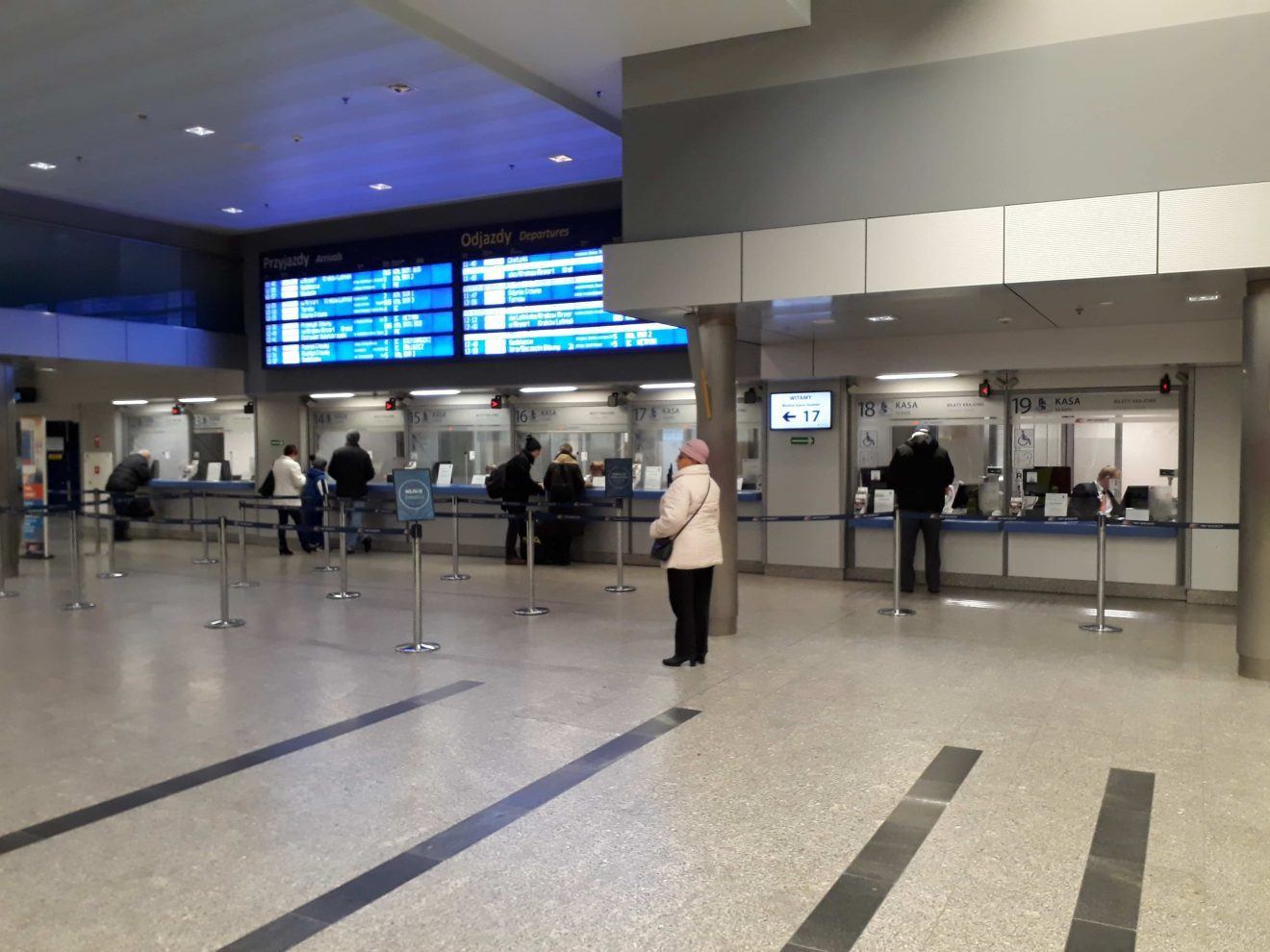 The main ticket queue for normal tickets within Poland

There are also ticket machines. I admit that I have never used one, simply because I’ve never bothered. These should also be able to give you tickets for most destinations in Poland. Here is a picture of one, as seen at Kraków Główny station. 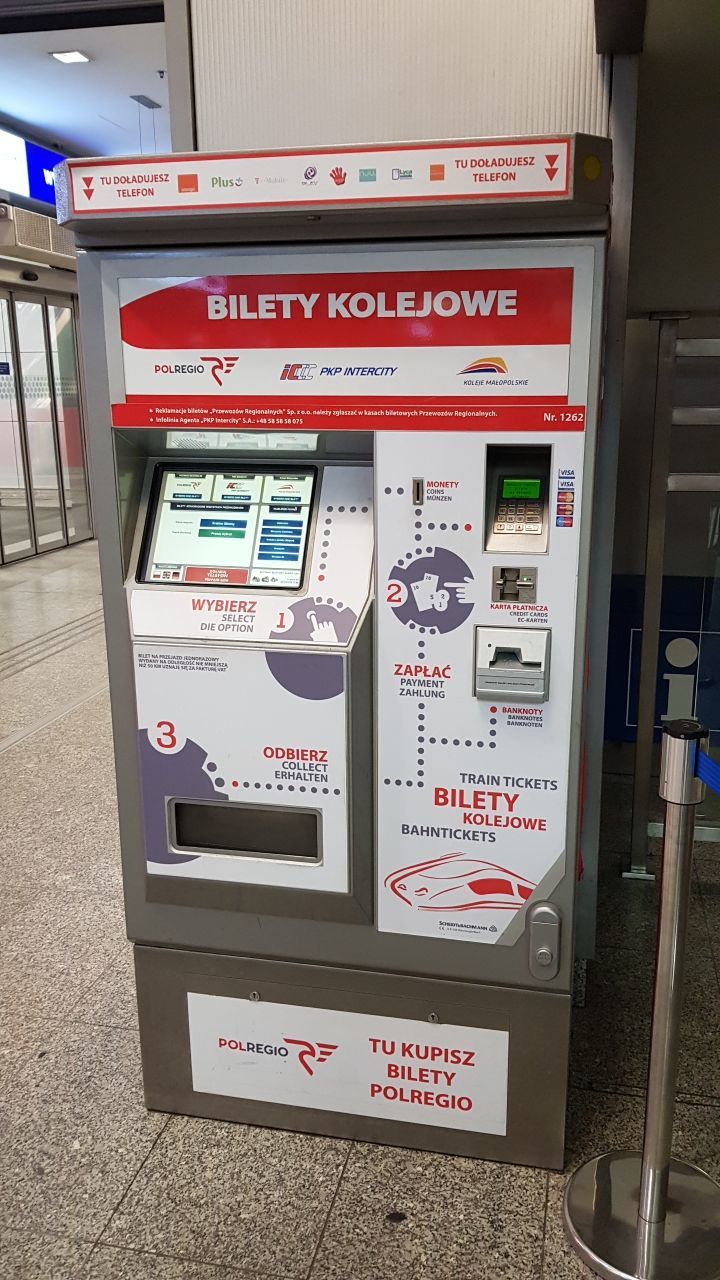 If you can’t face the queue (or the Polish ticket window), have a go on one of these machines

• Each platform has two tracks (“Tor” in Polish”)

• Each track is divided into sectors. These are not usually relevant.

• Trains are announced “arriving on track x at platform y”.

When you read the departure board, you will see which peron your train is leaving from. And always pay attention to what it says on the train before you get on. 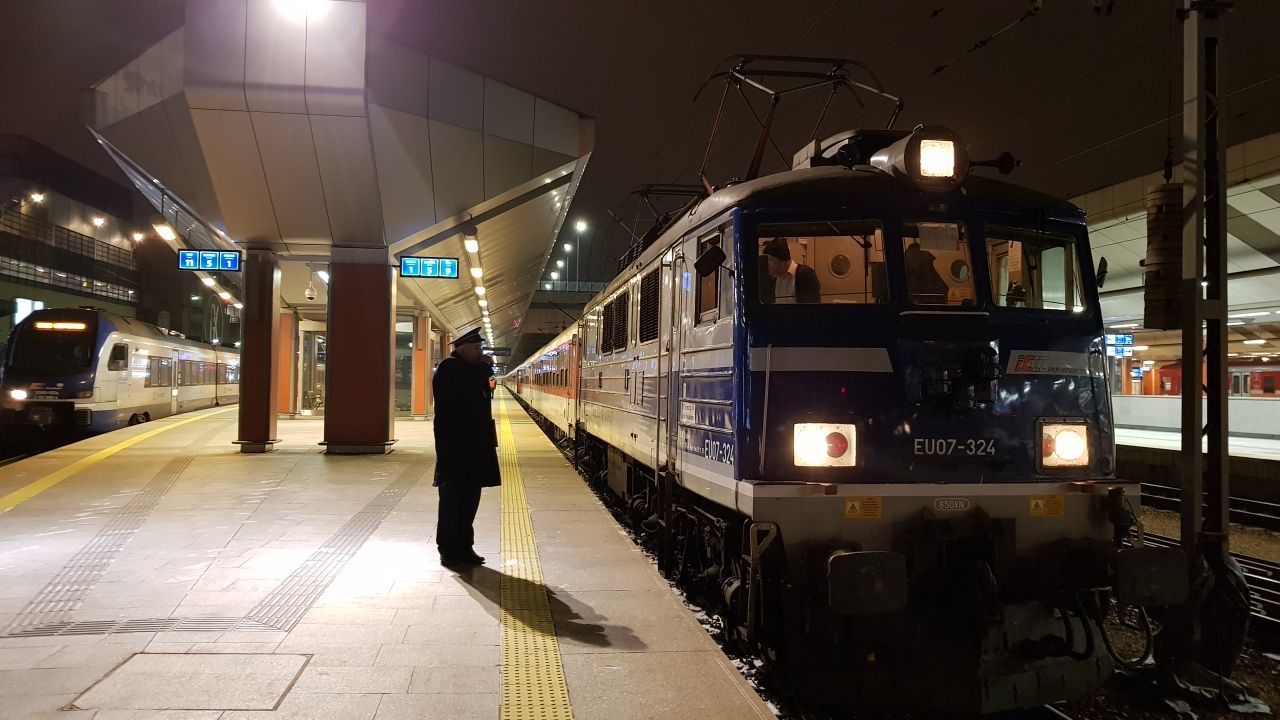 diamond painting kit there are lots of products.

I’ve put all this information into a nifty 20-page e-guide with lots of pictures and maps, so you can find your way more easily. If you join my free Rail Guide Europe club, you can find it among my other free Insider Rail Guides.