By Edward | Ask Me Anything 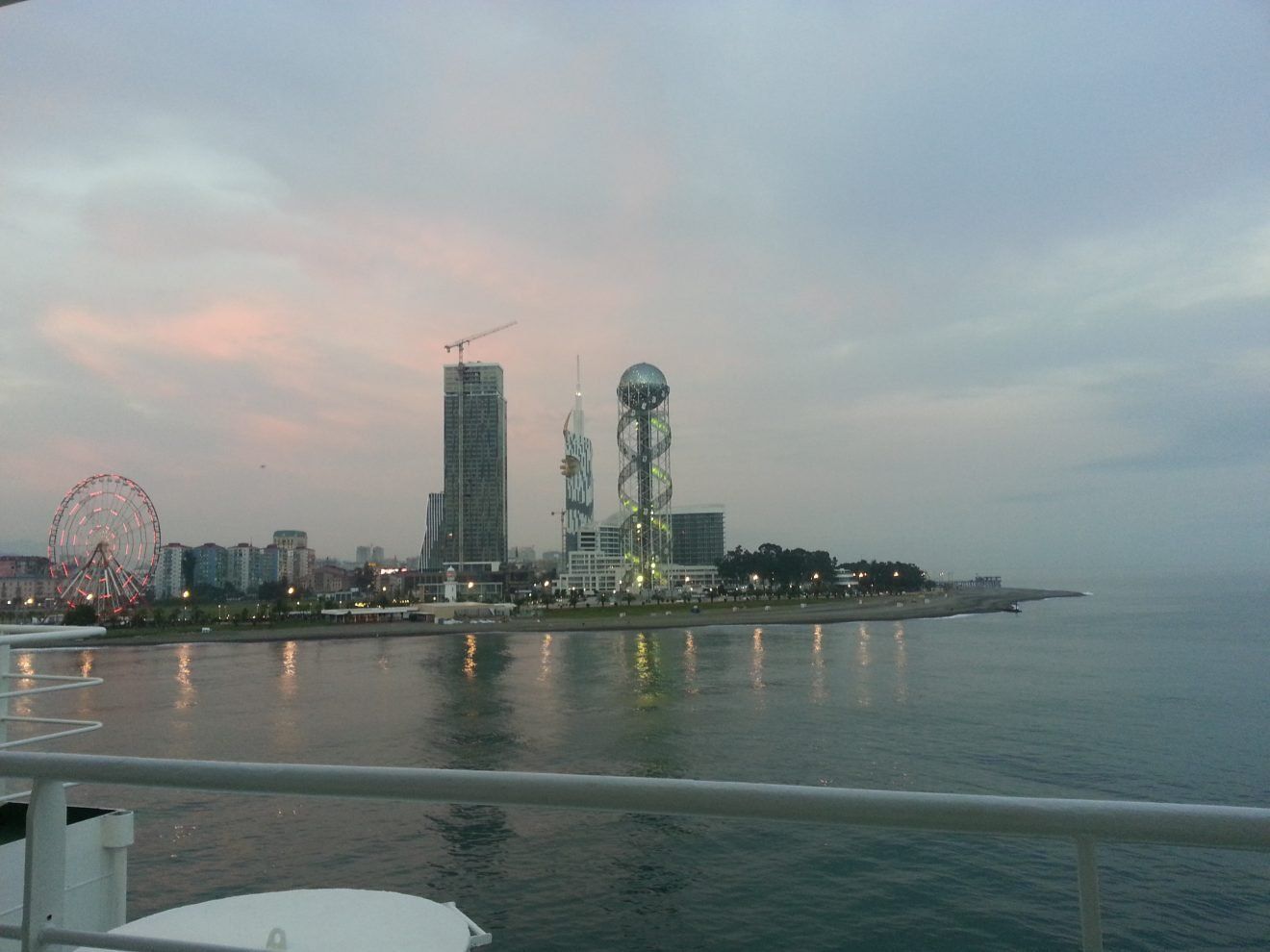 Dagmar writes: I want to go to Georgia by train. Have you got any tips about how to get there? Where can I buy tickets? How does train travel work in Georgia? What does one need to know?

If you look at the map there are three ways:

Going north via Russia is not an option as it has no rail links with Georgia proper since the 2008 war.

Going south via Turkey is daunting: getting through the Balkans involves multiple changes. Not all trains can be booked online. There is a longish coach journey through Eastern Turkey that you cannot avoid (yet).

Georgia by train and boat via Odessa and the Black Sea

If you have an EU, US or Canadian passport, this is the most painless way as you don't need any visas at all. Furthermore, you can book the whole lot online - all the way from Western Europe to Tbilisi.

You travel through the EU, Ukraine and Georgia. There are regular ferry sailings from Chornomorsk (formerly Illichivsk) to Batumi. This service is all year round and run by Ukrferry. During winter the boat goes twice a week, during the summer more frequently.

Here is how I did it

1. Starting from Munich, I went to Cheb with a Bayern Ticket. Such a humble beginning for such a long journey, but there you go. This ticket I bought on the day.

2. At Cheb, I got the (now defunct) Slovak sleeper to Košice. This I had booked a bit in advance from Czech railways.

3. At Košice, I changed on to a train to Čierna nad Tisou. This ticket I bought at Košice station. It is cheap and cannot sell out.

4. At Čierna nad Tisou I got the border hopper to Chop, in Ukraine.

5. From Chop I went to Uzhgorod in a Marshrutka. This was to cut down my wait. I could have stayed at Chop, but a four hour wait at Chop gets boring. 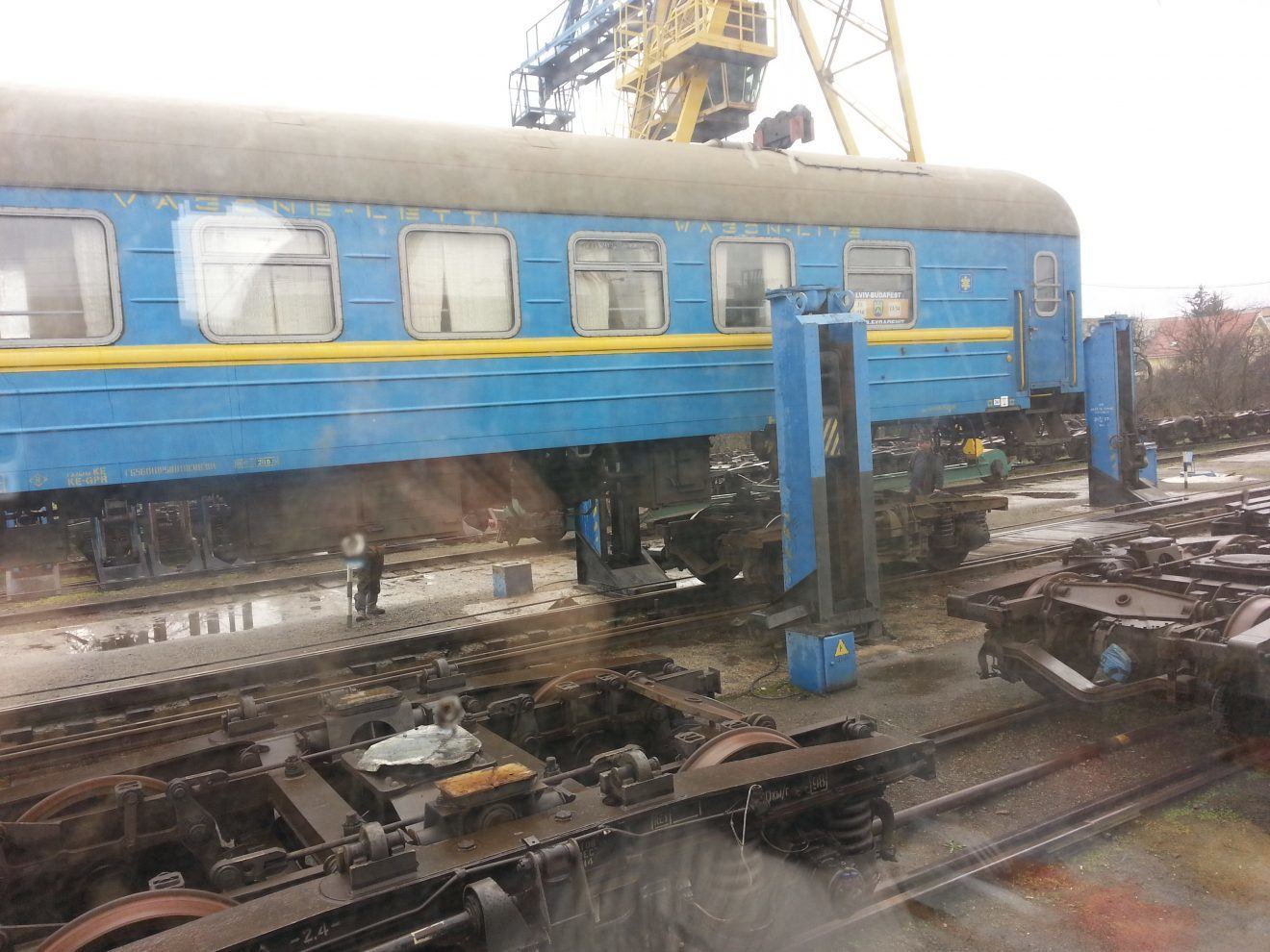 If you go on a direct Ukrainian service (i.e. Vienna-L'viv) the bogies will be changed at the Ukrainian border.

6. From Uzhgorod to Odessa I went on the Ukrainian Railways' Khadzhibey train. Train №107/108 "Хаджибей/Khadjibey" runs daily between Odessa and Uzhorod. It left Uzhorod in the evening and reached Odessa at lunchtime the next day. This ticket I also got online directly from Ukrainian Railways.

"Khadjibey" is what the clutch of shacks and fortress was called that the Russians nabbed from the Ottomans when they conquered the Black Sea coast. Odessa was founded on the ruins of Khadjibey in 1794,

7. After a four day wait at Odessa, I went by taxi to Chornomorsk and embarked on the Kaunas Seaways to Batumi. This was a two-night voyage. Left Chornomorsk in the late afternoon, arrived Batumi in the early morning.

Here I shall go into some detail about the voyage across the Black Sea. The Ukrferry ships are primarily goods ferries. Ukrferry transports lorries and (freight) railway coaches between Georgia and Ukraine. Most of the passengers are lorry drivers. We foot passengers are a side-hustle. This is why the ferry uses the goods port of Chornomorsk, rather than Odessa. 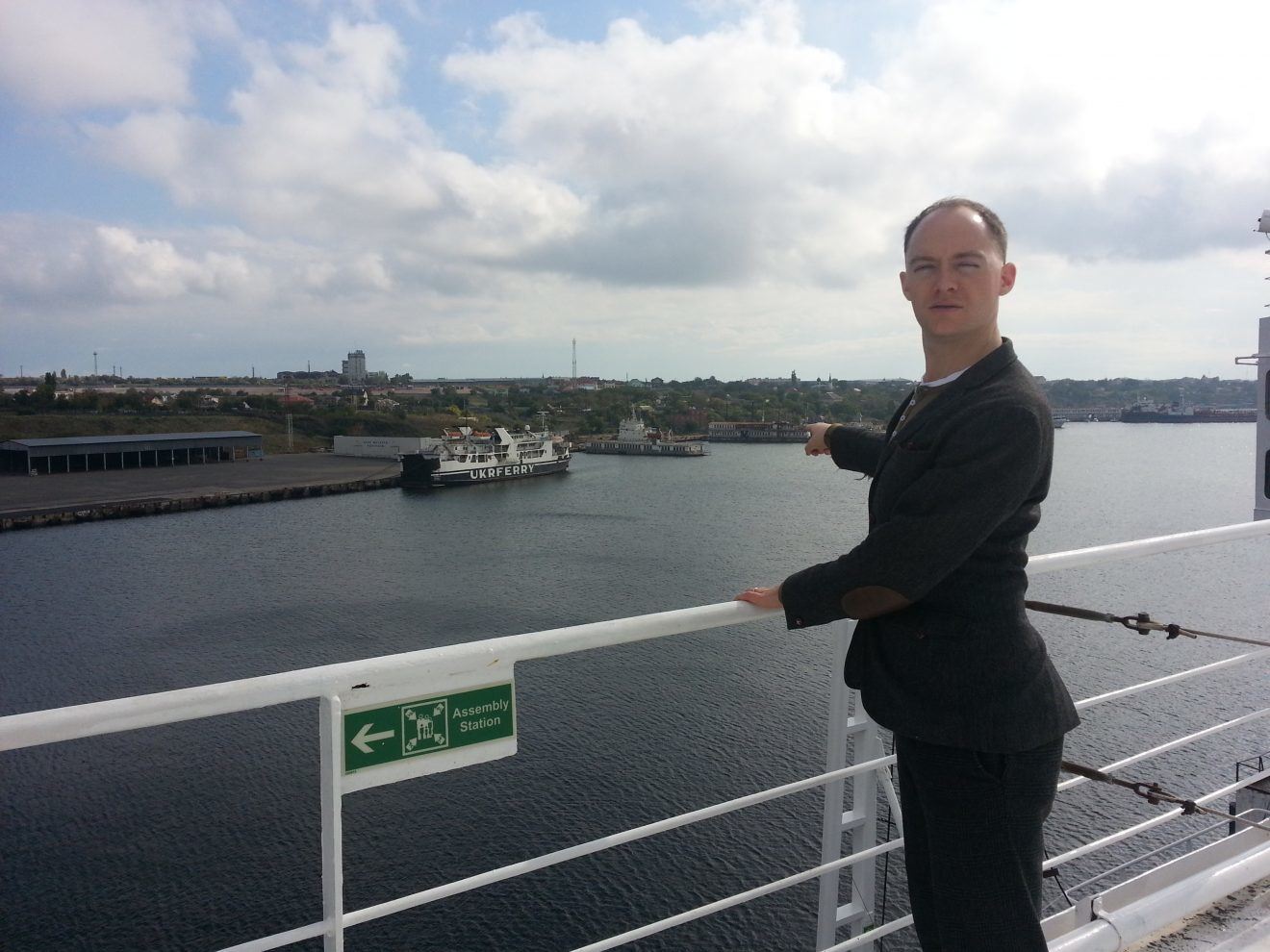 Leaving Chornomorsk. The little ferry in the background is the Caledonia, as seen in Andrea Maria Dusl's film "Blue Moon".

I booked the ticket online and paid for it on the ground at Ukrferry's head office outside Odessa. The booking process has changed since then, for the better. The whole thing can be done in English and you can pay online.

Getting to the port

The district where the ferry terminal is, is called Burlachya Balka. It is on the southern outskirts of Odessa.

The № 25 bus gets you there from Odessa's main station. It is seventeen stops and currently costs 24 hryvnas (7o¢). In Odessa you usually pay the driver at the front when you get off the bus.

The stop you want is called "Burlachya Balka". It is a request stop and there is no bell to ring. You have to know where you are and bellow (bellow!) "Ostanaveetye pozhaluysta" (stop please) or "Na slyeduyushy" (..at the next stop) or "Burlachya Balka!"

Or go by taxi. I went by taxi. Taxis in Odessa are cheap. Get your hotel to order a taxi for you. Hotels will ring reputable taxi companies that tell you the price before your taxi even arrives. This makes it harder for you to be quoted a fantasy price.

Meta comment: I just spent two hours looking at maps, retracing my steps and poring over Ukrainian public transport fora. I staked the district out on Google Streetview. My conclusion is that unless you are familiar with post-Soviet transport and speak some Russian, you had best get a taxi to the ferry terminal.

The lengths to which I go for you

I go to great lengths for you, my reader. One of these lengths is to ring up Ukrferry in Odessa and ask what the correct procedure is for 2020. Yes, in Russian. You're welcome. 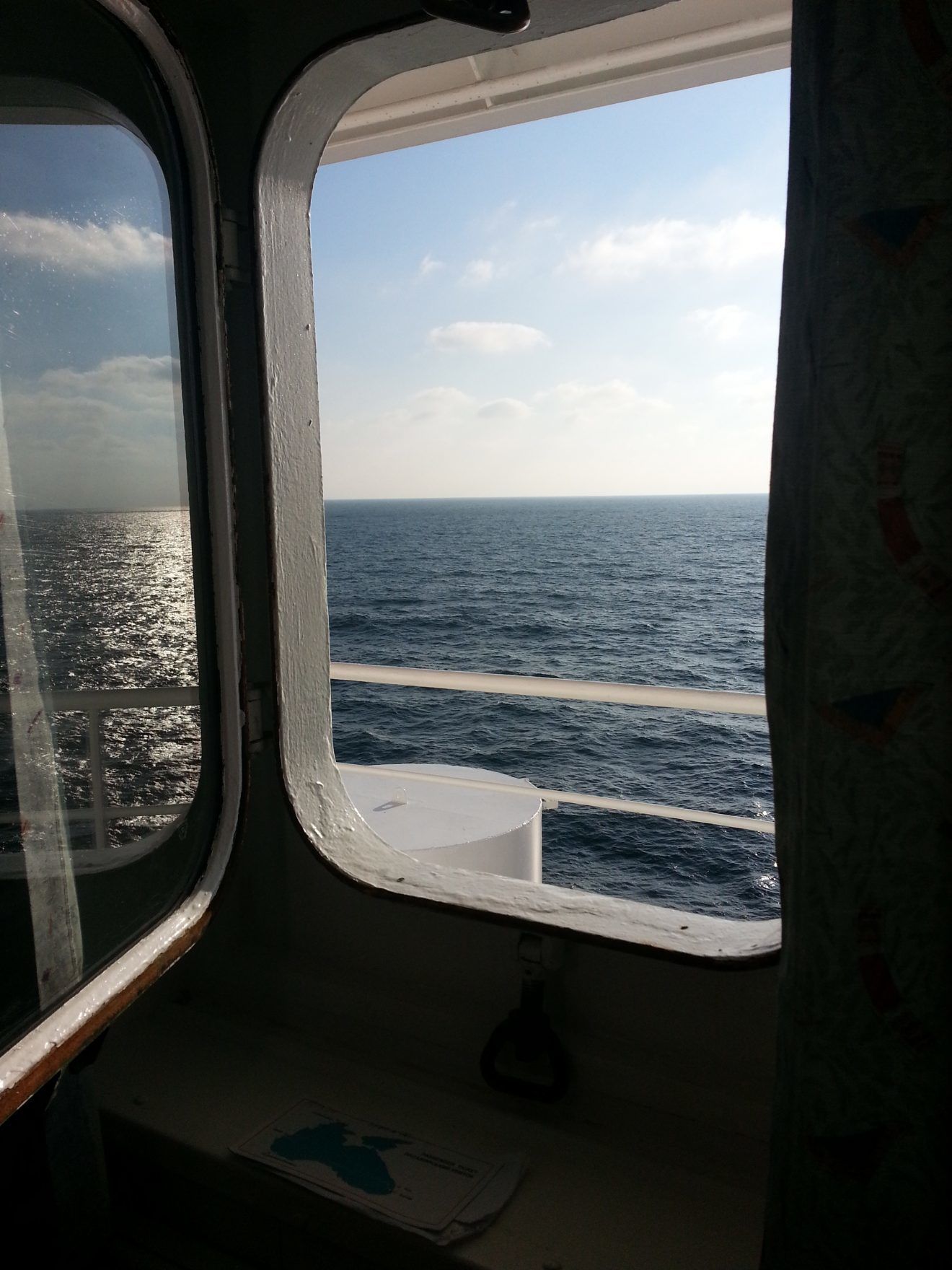 No dolphins in this picture

The ship moors with its stern to the pier and foot passengers walk on though the same entrance as the cars, lorries and trucks. The low-point of my honeymoon was watching my wife pick her way across the rails in the floor, in the half-light of the cavernous ship's hold.

But then there were dolphins. 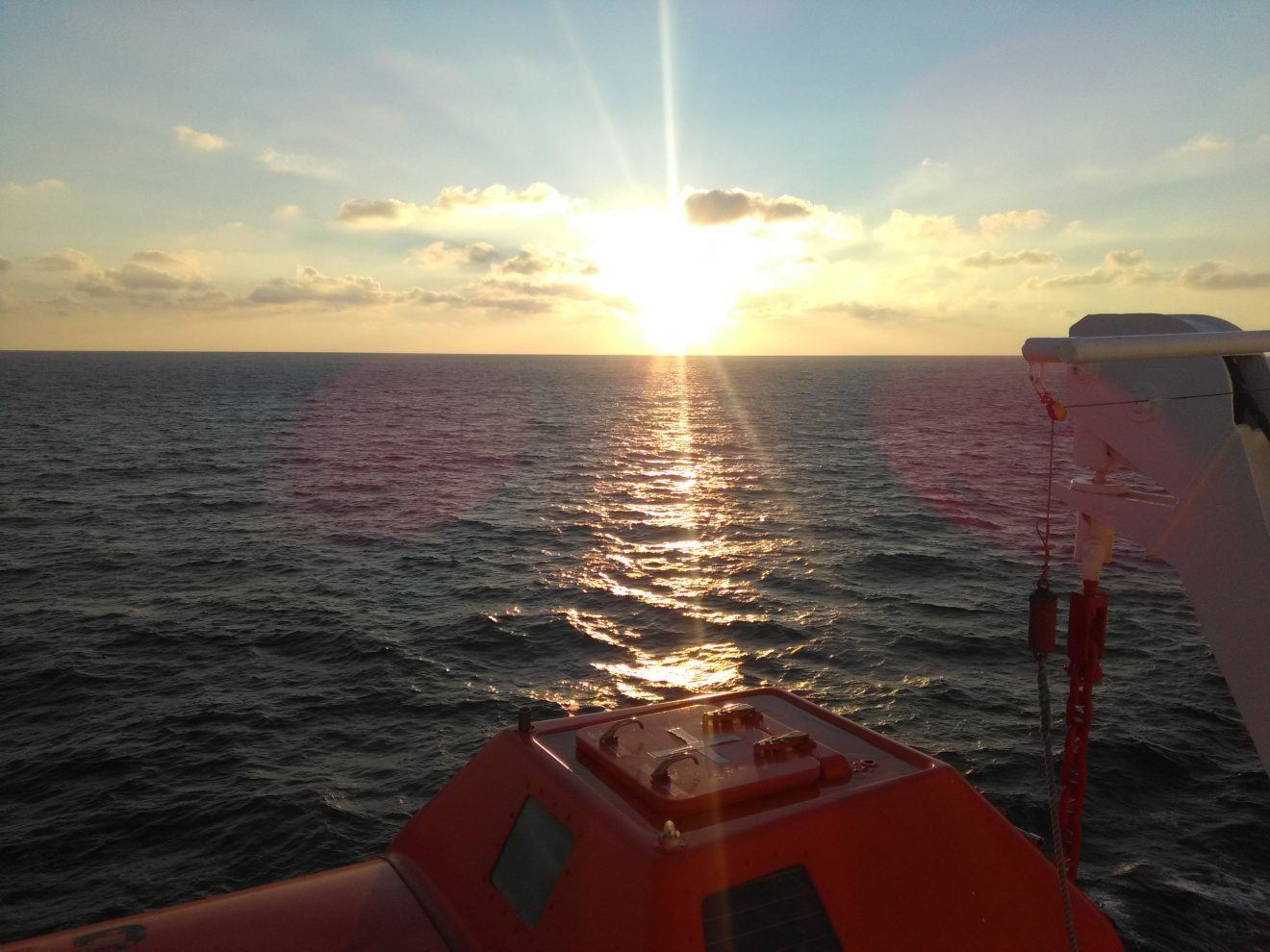 Dolphins. Completely invisible in the waves and sunset.

This is a real boat trip. You get to walk about on deck and watch the dolphins and seagulls. You can climb steep metal staircases. And open your cabin window.

You are fed three times daily in the ship's canteen. There is no buffet or menu. Everyone eats the same food. It is Slavic canteen fare with meat, sides and always a salad. There is no gluten-free or vegan option. Lactose-intolerance? What do you mean, you can't drink milk?

An announcement is made on the tannoy in Russian, Georgian and English - "food is served, don't be late". Seriously, don't be late. They chuck you out of the canteen after 45 minutes or so. 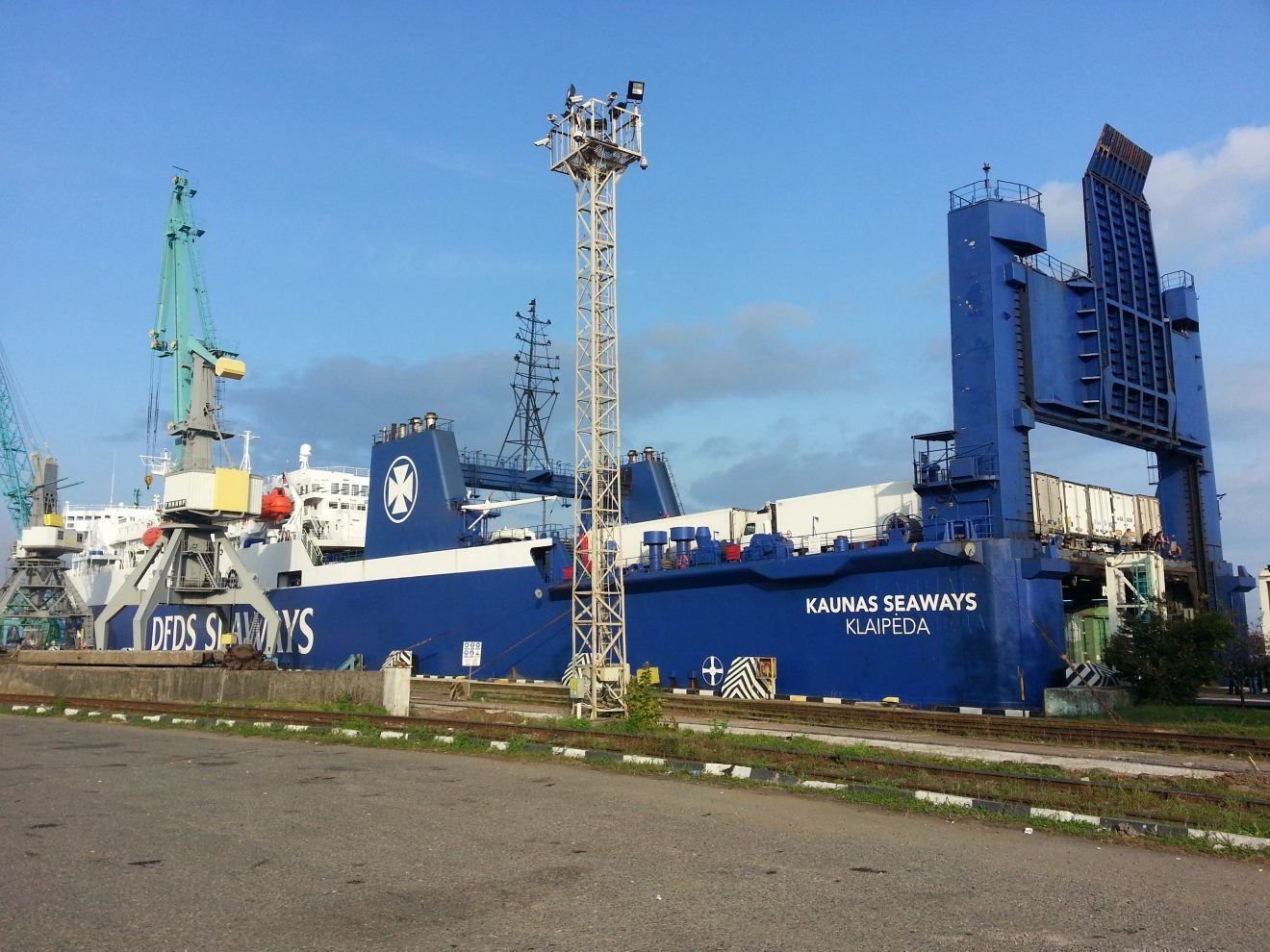 Georgia has inherited its railway system from the Russian and Soviet Empires. 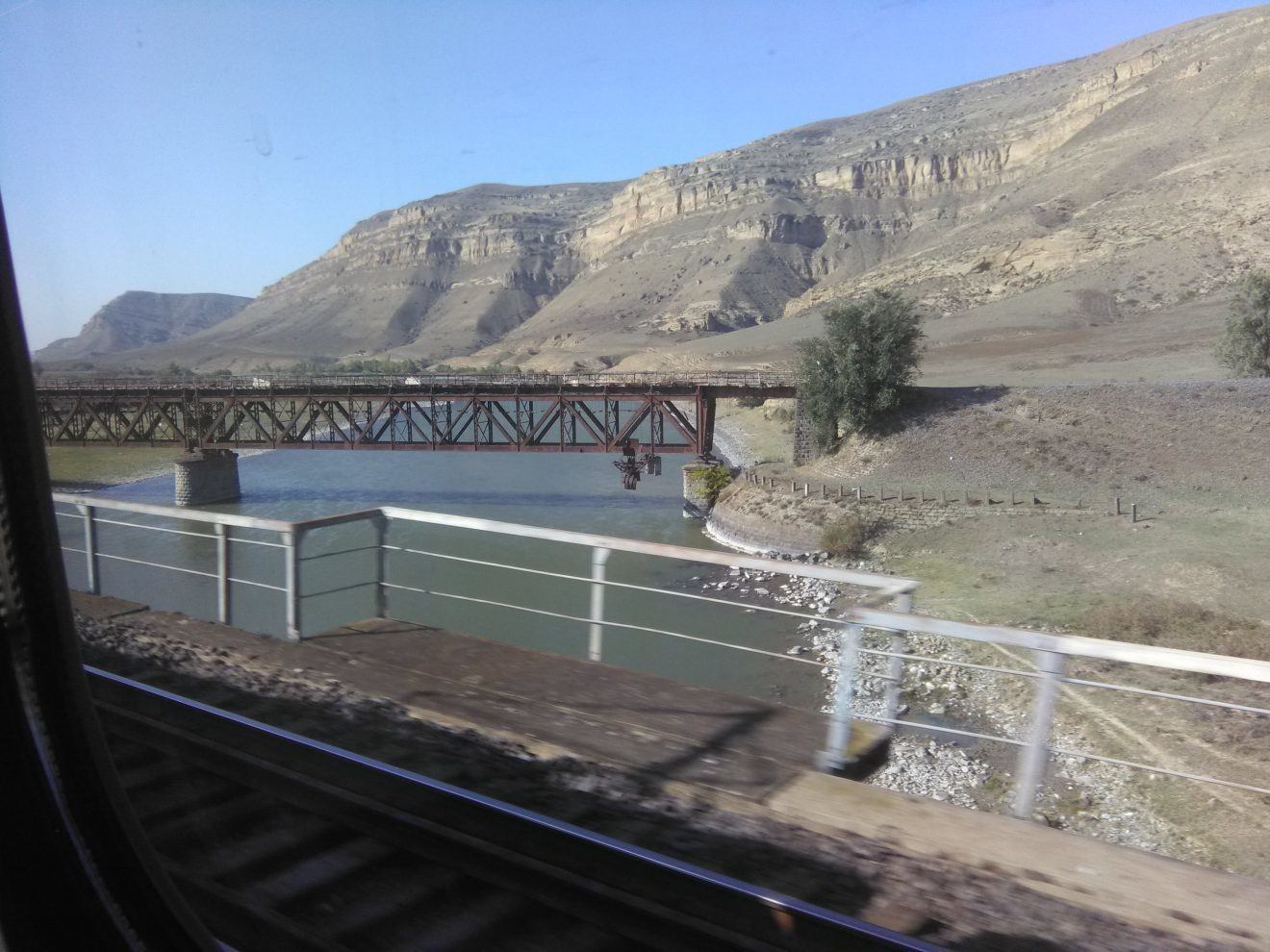 I used the Georgian Railway to get from Batumi to Tbilisi. In 2016 this was with rather squeaky Chinese trains. Now this line is served by Georgia's flagship trains - double deck Swiss-designed Stadler sets.

You can only move if the guards let you. My wife was one month pregnant and didn't take to travelling backwards through mountains. I only managed to get us moved by telling the guards that my wife was pregnant.

If you translate the Georgian "she is pregnant" literally, you get: "she is two-souled". Isn't that a beautiful way to say it?  But I digress.

You can buy tickets for the Georgian Railways online and up to 40 days in advance.

The e-ticket system is quite easy to use, and it is in English. Sadly this only works for domestic services, so if you want to go to Armenia or Azerbaijan, it won't help you.

I shall shortly be adding guides to booking on Georgian and Ukrainian railways to the Insider Rail Guide library. 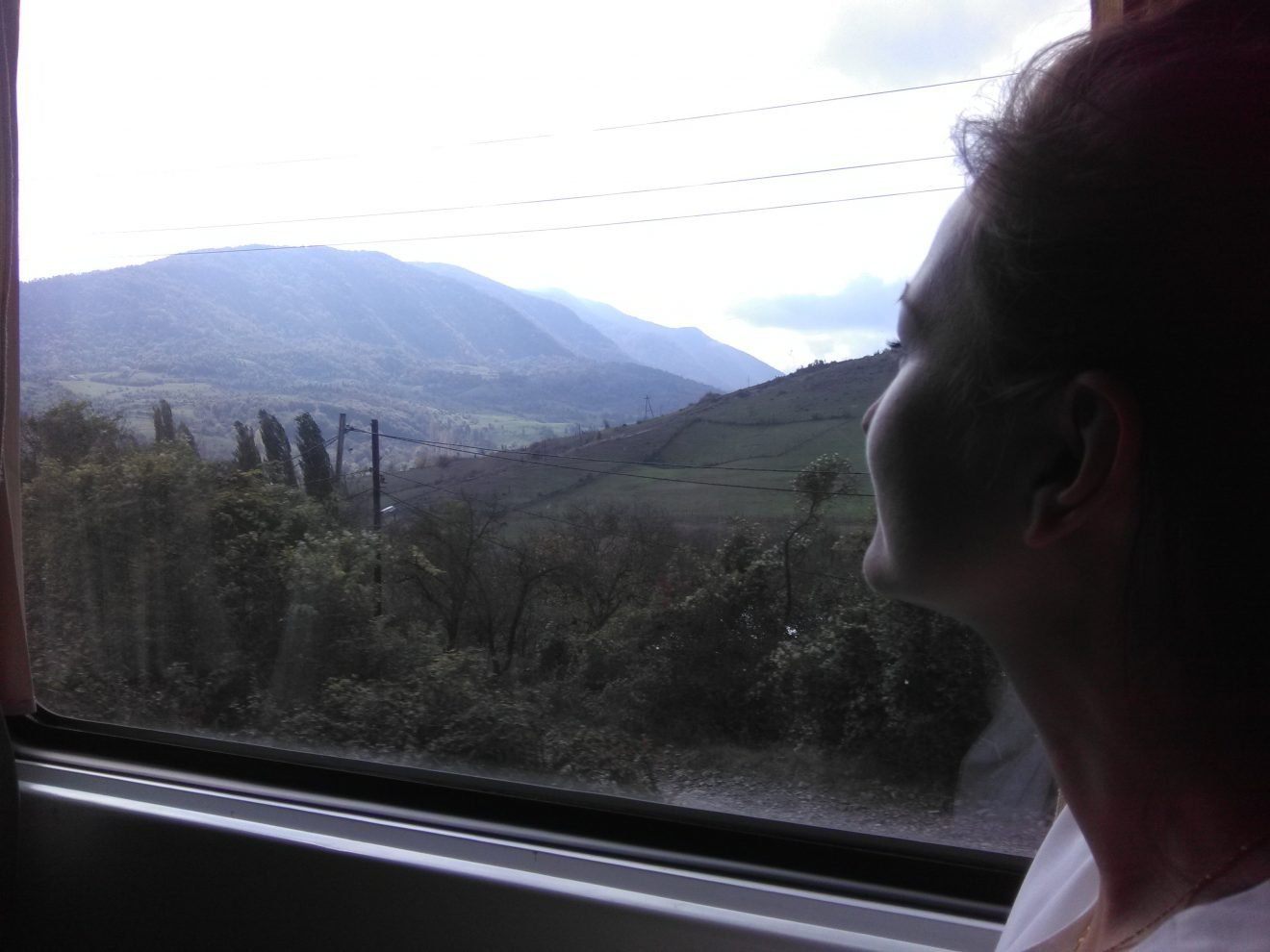 On the horizon: Georgia by train with the Ankara-Baku direct sleeper

It has been postponed several times: The Azerbaijan Railways direct sleeper service from Ankara via Tbilisi to Baku.

The new Swiss-made dual-gauge carriages are already in Azerbaijan. The border station at Akhalkalaki and the Tbilisi-Kars railway line are finished. Smiling leaders have cut ribbons, watched by men in sunglasses. But the train has yet to enter service.

However, when it does, this will be a supremely comfortable way to get to Georgia by train. If you make it through the Balkans.

Abkhazia is a breakaway region that belongs to Georgia, but is currently not controlled by the Georgian government in Tbilisi. It has its own government and you need a visa to enter.

Abkhazia relies on Russia for protection and is reachable by train through Russia. Indeed, since the 2008 war, Abkhazia is the only part of Georgia with a direct rail link to Russia.

There are trains from Moscow to Sukhumi, the capital of Abkhazia. During the winter, train № 306M runs every two days, during the summer it runs daily. The journey takes 43 hours.

If you enter Abkhazia via Russia, you have to leave via Russia. You will therefore need a multiple visa for Russia.

Were you to travel onwards into the rest of Georgia you wouldn't get an entry stamp and thus be entering Georgia illegally.

How I recommend you do it

Until the Azerbaijani Railways Ankara-Tbilisi-Baku sleeper comes online, the route via Odessa is king. Here is what I recommend you do:

Most romantic journey ever

If you pull this off, you are in for one of the most romantic journeys imaginable.

Vienna, L'viv, Odessa - the stops along the way are already oozing with romance and excitement.

Add a two night voyage on a real ship from which you may see dolphins. I certainly did. 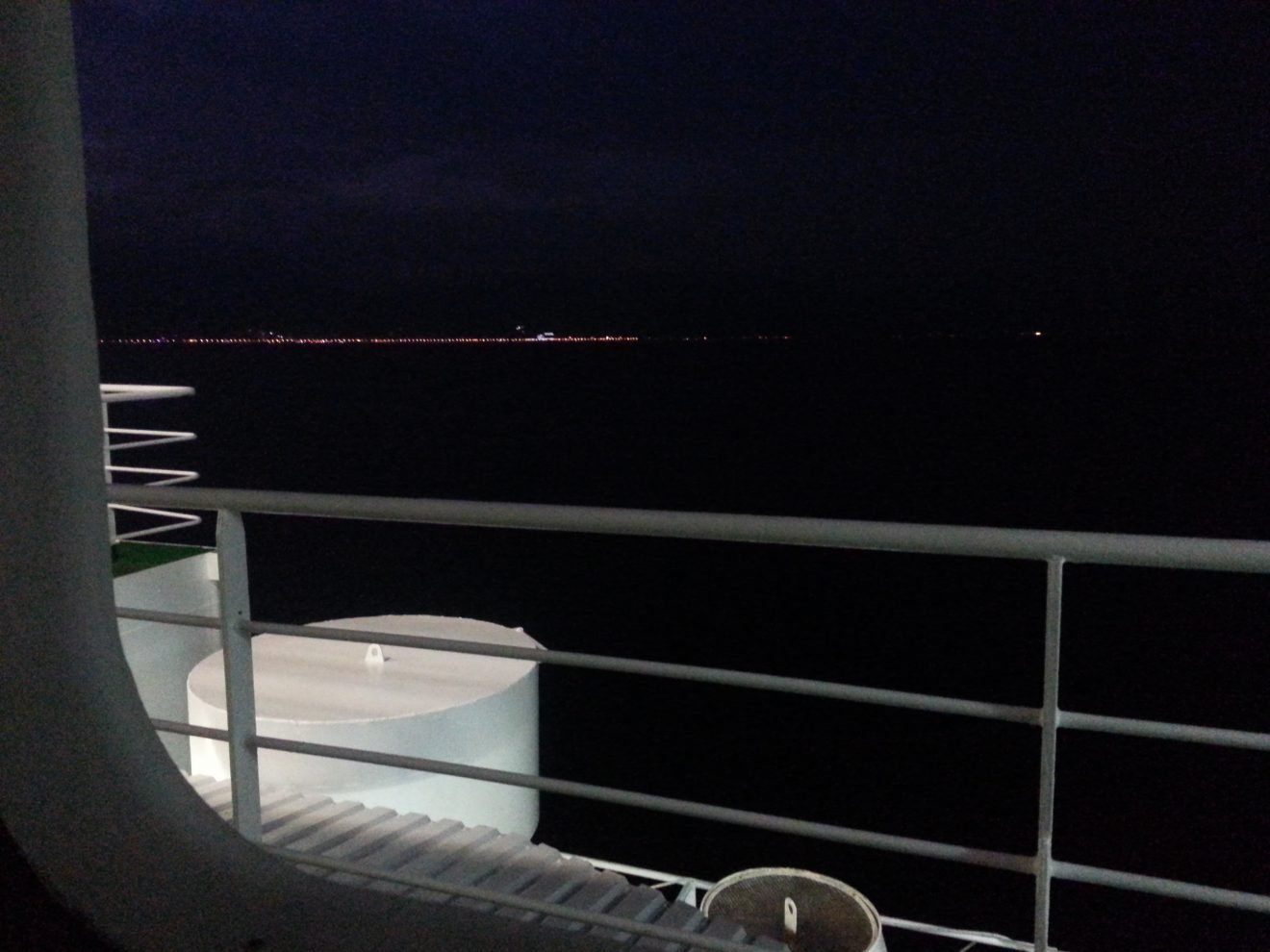 Then arrive in a part of the world that God had kept for himself, but in his goodness gave to the Georgians because of their singing and celebrations.

I can't think of anything better. Please go forth and send me the pictures.