13 Hacks for Sleeping like a Baby on Any Night Train 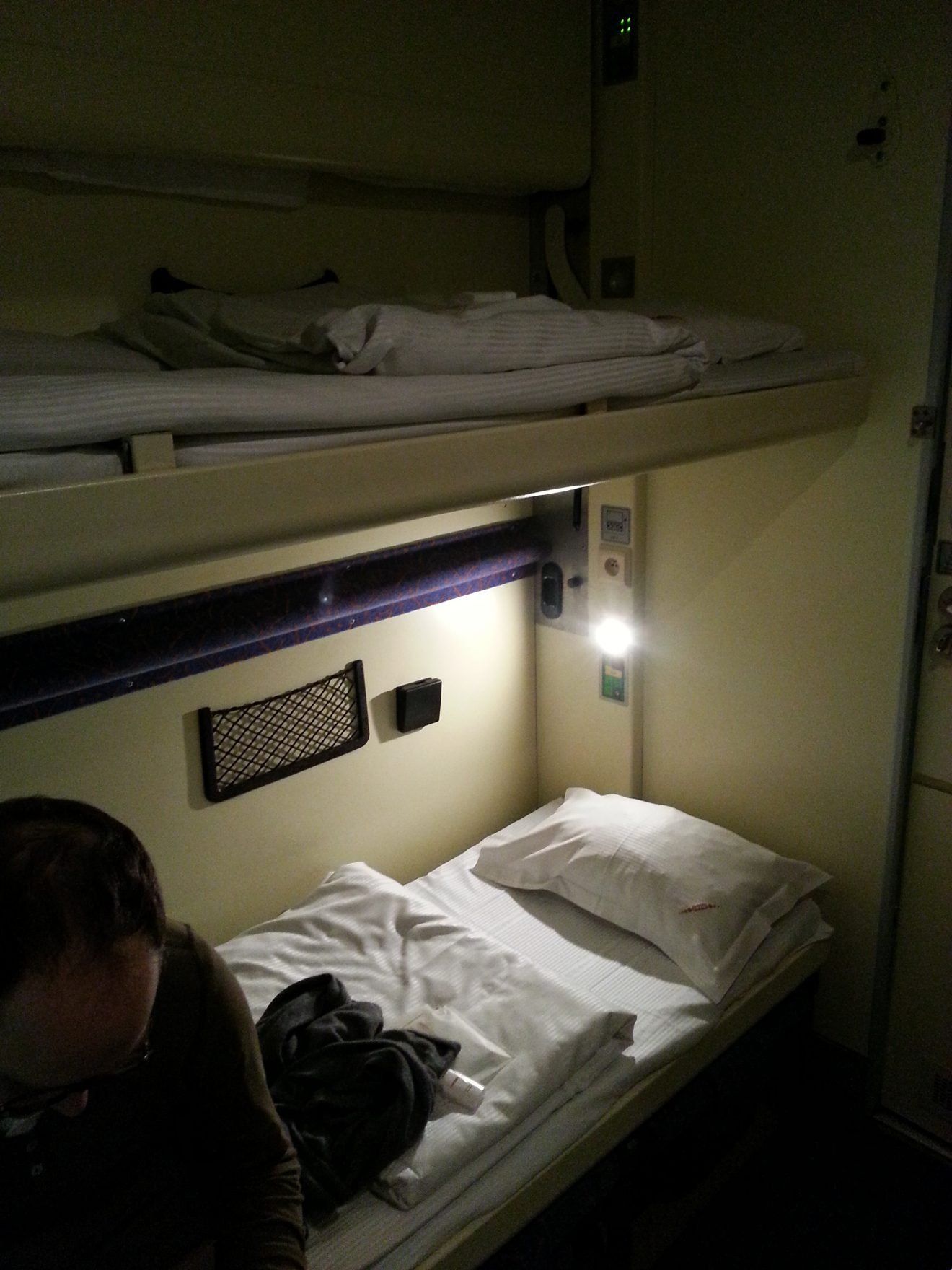 13 Hacks to Sleeping on any Night Train

Sleeping on a night train. Silent Hunter asks: "What is your advice for getting a good night's sleep on a sleeper or couchette train?" Here is what I came up with in one morning. I haven't done all of these things yet, but I shall definitely try them next time.

It is always a challenge, sleeping on a night train. Or indeed any environment to which you are not accustomed, be it at your in-laws, under a bridge, or just on a new mattress.

I've racked my brains and screwed up all my years of experience with night trains. I touched this subject in a post I wrote for Amateur Traveler Podcast. Here is what I came up with to help you sleep:

"Oh come on, Ed! I thought you said HACKS?" Sorry for stating the obvious, but this is a big one. It helps to be tired. Get this right and nothing else matters. Be up nice and early the morning of your journey and do lots of stuff. Say, trudging around Venice all day.

I mean alcohol. If you can. Beer contains hops and hops make you sleep. Beer contains alcohol and alcohol relaxes. Relaxation makes you less tense. This can help with sleeping on a night train. Aim for a small, strong IPA. In Germany, some kind of Export. In Italy, Speciale. Or just have red wine.

Beer contains water and water makes you pee. So don't have too much. There is nothing worse than waking up on a night train and sort of needing to pee and then agonising for hours whether to...

The answer to this, by the way, is immediately to get up and get it over with. If you force yourself back to sleep against your bladder, guess what? In the morning, when everybody is going to the loo, you'll be desperate and have to wait. And end up gulping stone-cold coffee half inside your coat as your train stops at your destination. But I digress. 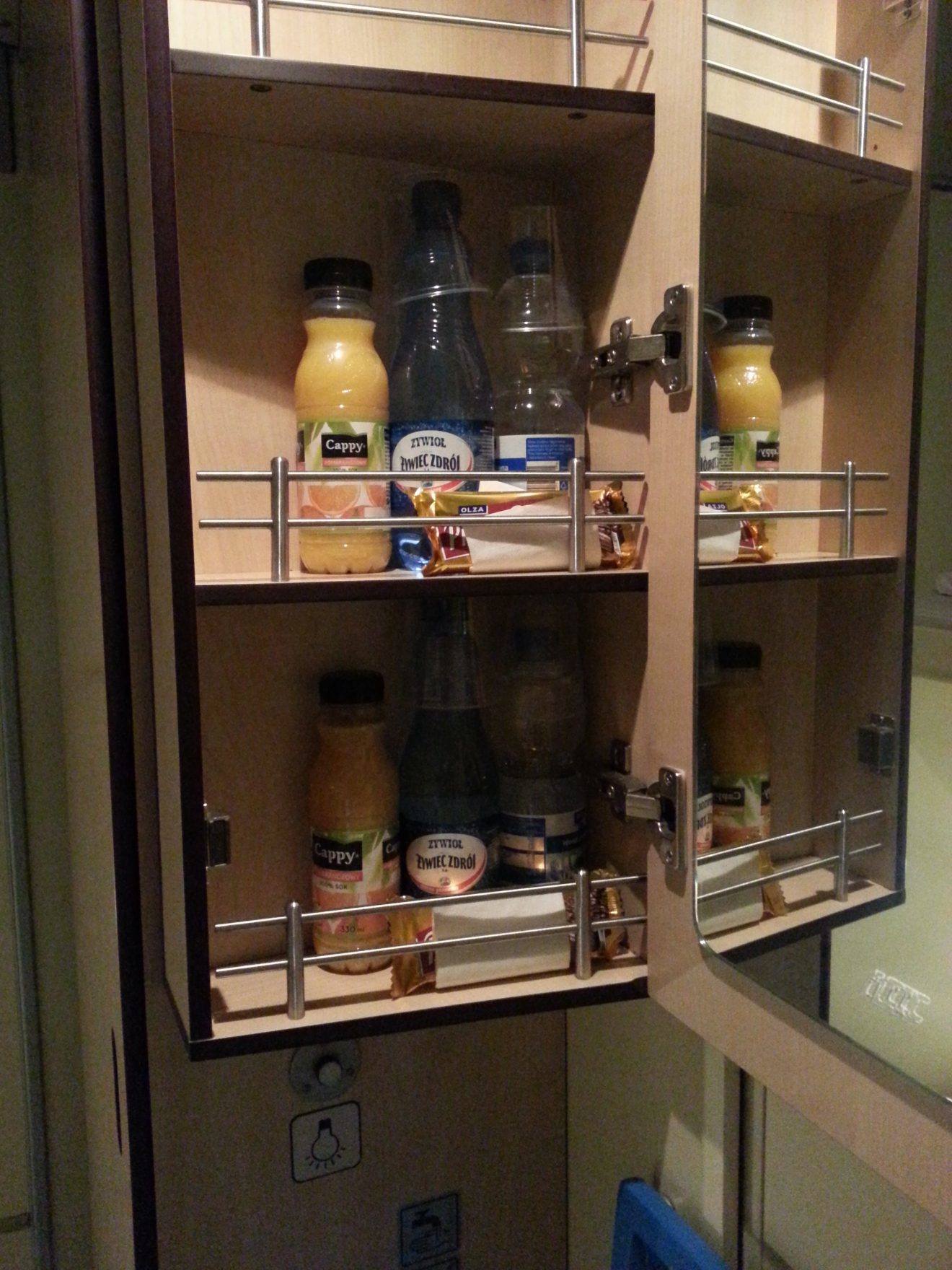 Polish Rail are very generous with the beverages. It's a trap.

Personally, I don't ever use ear plugs. But other people do. Ear plugs are definitely a thang for sleeping on a night train. The train is moving, there will be noise.

Once I had a sleeper in which somewhere, behind the cladding, something  kept softly tapping at irregular intervals. It drove me insane and I slept about one hour. I would have needed ear-plugs then.

The Hungarian couchettes that run between Zürich, Munich, Vienna and Budapest have very loud air conditioning. Imagine sleeping on the wing of Concorde. Ear plugs would be good there.

Go for a walk

If you really cannot sleep, don't just lie there, fuming. Put on your wig and your strappy sandals and go for a wander up and down the train.

If you are on a train with a dining car, and it is open, good for you. Have yourself a drink. If there is no dining car, you might still get something from the staff. I remember an American waking me coming at 3.30 AM and buying peanuts and a coke from me.

Pour your heart out

Chase down the attendant and strike up a conversation. A sleeper attendant is like a barkeeper. If you want to pour out your heart, they are there for you.

Many's the night I've listened to some insomniac's story. Once on the way to Venice I had a beautiful chain-smoking Albanian (let's call her Aferdita) telling me about her forced marriage all the way from Rosenheim to Tarvisio. That's five hours.

I'm on a roll now. Keep a small roll of sticking plaster and a little bit of blu tack (Americans: Poster Tack) in your toiletry bag. These can be invaluable for keeping the door of the washbasin shut or preventing said door from vibrating in its hinges. Newspaper is also good for such interventions. 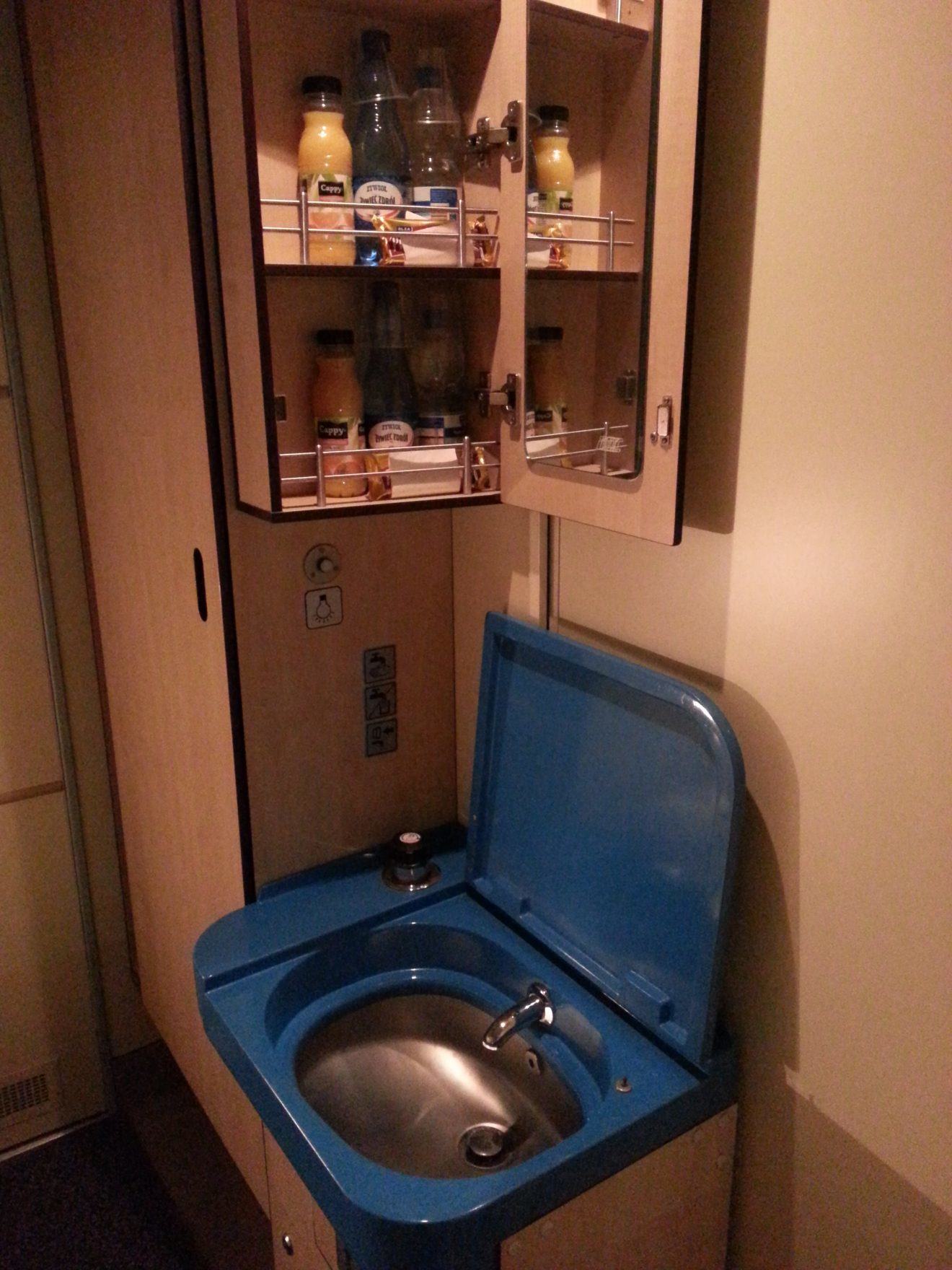 Doors can sometimes open or vibrate. Tape, blu tack or newspaper can help fix this.

Try lying the other way

Sometimes it helps to lie the other way. Let's say you are lying in a bottom couchette with your head next to door. Now let's say someone keeps getting up, putting a wig on, fumbling with their strappy sandals and banging the door. You'll have much more peace with your head at the window.

Here is something fun to try: lie on your back, looking upwards out the window at the stars. Now imagine everything upside down. All of a sudden you are soaring through the darkness, watching the stars drift light-years below you.

Another old hat, but I'm still going to mention it: try and resist the temptation to play with your phone. If you see what time it is, you might feel stressed by how little time you've got left. Then there's the blue light the screen emits. Scientists say this screws up your sleep cycle.

Most sleeping cars now have air conditioning. Me, I prefer windows, but I'm an old fuddy-duddy. Always have been.

Sometimes the air conditioning can emit very dry air, parching your nose and mouth. This has stopped me from sleeping on a night train, I can tell you. Here's what to do: 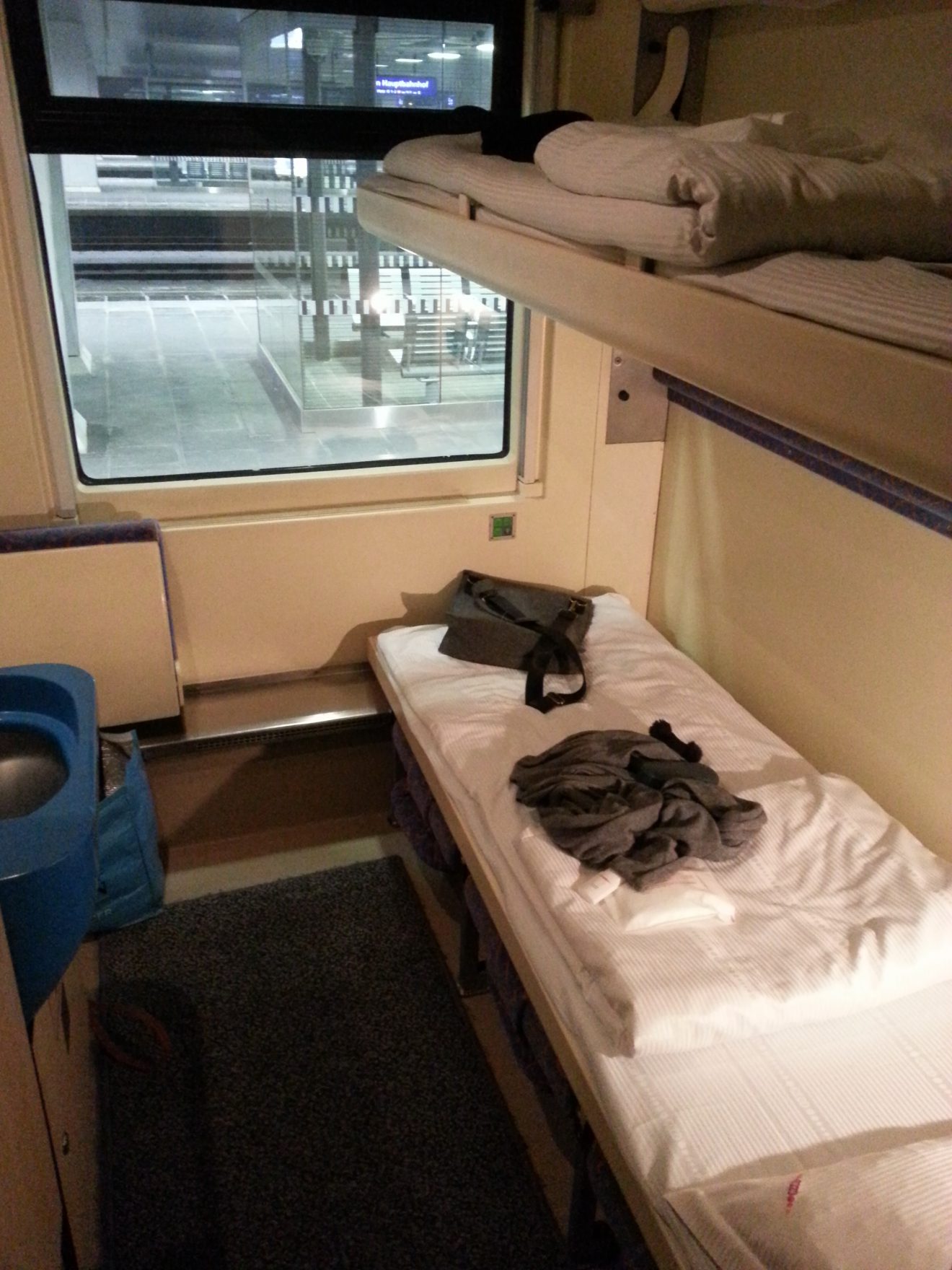 This applies in all compartments, but especially if sharing with other people.

Put your valuables somewhere safe when sleeping on a night train. You needn't be super original. It's enough that your wallet is harder to find than other people's. Also, spread your stuff about so that if something does get stolen, you don't lose everything.

That said, things don't get stolen that often. More important than anything else is to acquaint yourself with the locking mechanism and use it.

In 2015-2016 we had a terrible infestation with pickpockets on the Munich-Amsterdam line. After Frankfurt I would make a round and check that every couchette door was locked from the inside. Most were open, in spite of my exhortations to lock them.

Book something in the middle of the carriage

On the Russian and Ukrainian railways' sites you can choose your berth on a little map. The Nightjet hasn't got this cool feature yet.

Try not to give a toss

If you follow all the above tips to the letter and turn up expecting to sleep, you are doomed to fail. You won't sleep a wink. Sleep is about letting it happen, rather than making it happen. [Insert more trite wisdom about sleep here].

If you really can't sleep, just accept that it wasn't to be. You are more likely to sleep on a night train then.

I started off writing 6 tips, then went up to 9 and finally 13 as new ideas kept piling in.

A combination of these tips ought to help you get to sleep quickly on a night train. I have aimed to give you stuff that is relaxing, changes your thoughts and makes you more ready for sleep.

Then when the conductor knocks and brings you your breakfast you'll wake up bright-eyed and bushy-tailed.