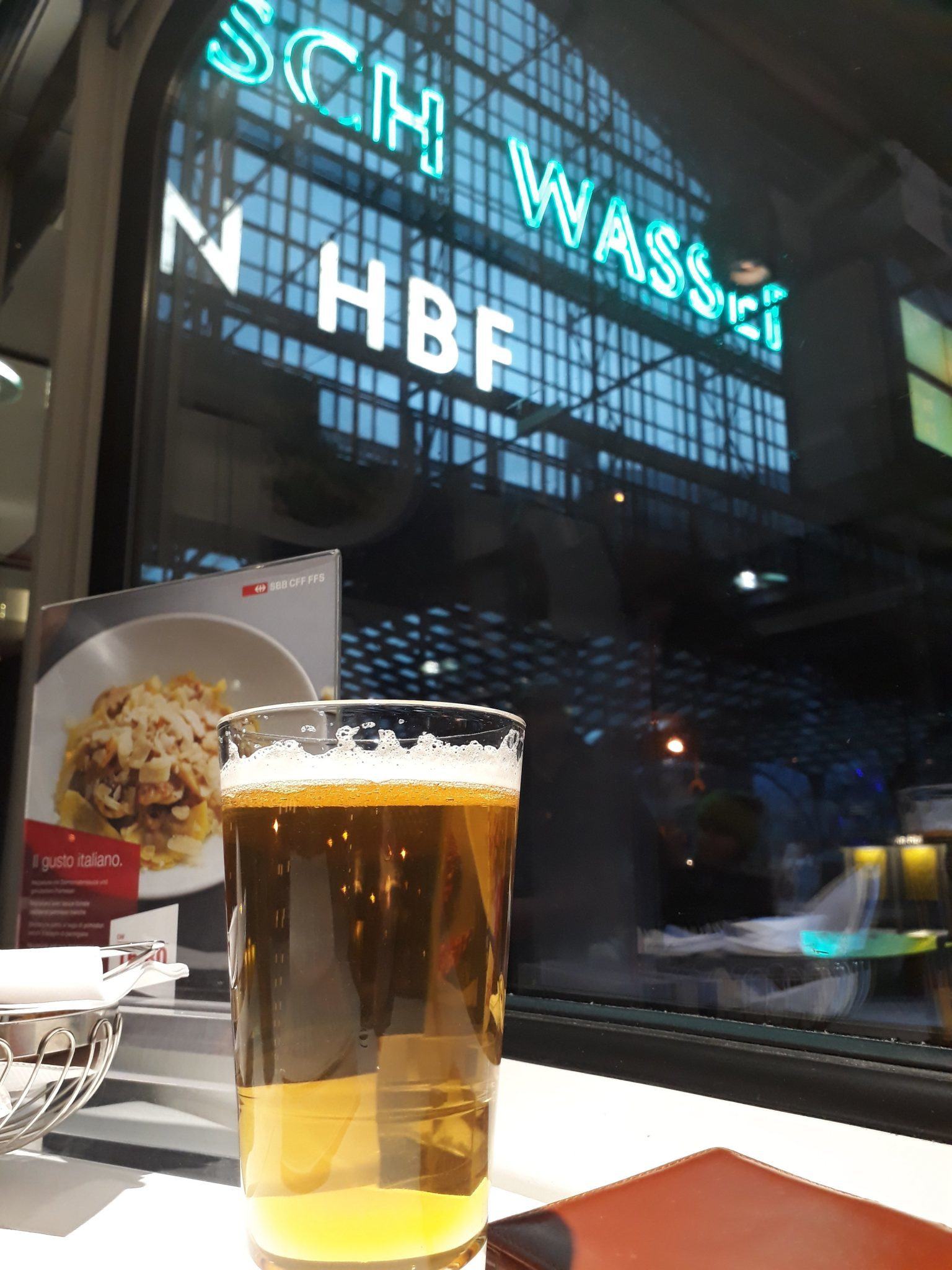 Before I begin: I digress

Before I get going on the Swiss railways' restaurant car, have I told you about the Edward Scale?

No, I haven't. The Edward Scale is my way of ranking restaurants.

How to rank restaurants on the Edward Scale

It is simple: a restaurant’s food should be better than its furnishings.

Good food is always good. Bad pizza does not become good pizza if you screw a Vespa to the wall and drape Italian flags everywhere.

A restaurant with a contrived interior doth protest too much. It is fur coat and no knickers. 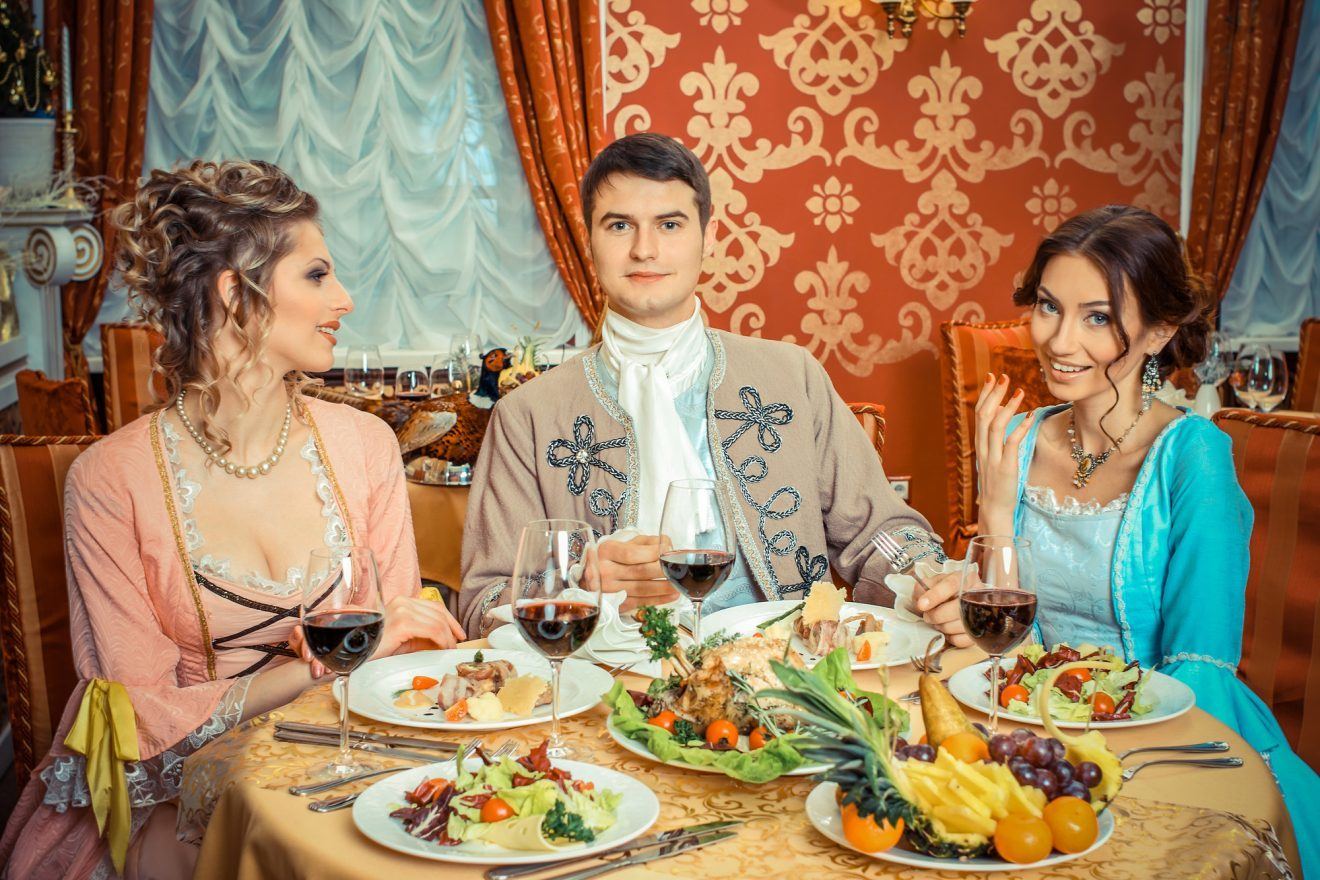 This restaurant doth protest too much

The best-ranking restaurant on the Edward Scale

For a long time the place with the best result on the Edward Scale was a small Russian dumpling stand, Pelmeni Welt, in the square outside Berlin Ostbahnhof.

Pelmeni Welt got a whopping 9 points on the Edward Scale: 9 points for its food (I grudgingly had to deduct one point because of the microwave) - minus 0 points for the interior. 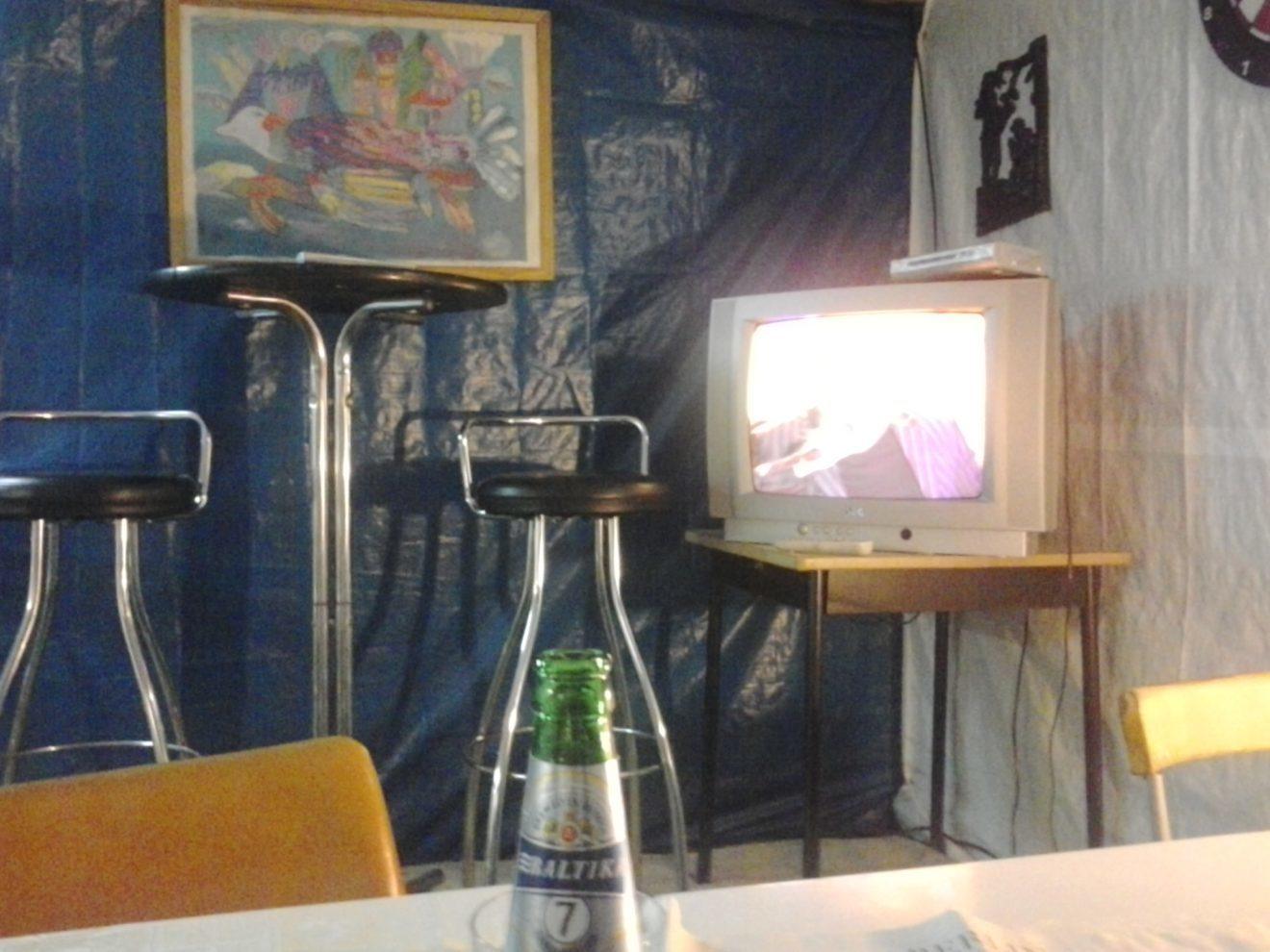 It simply has no interior. Pelmeni Welt is a sort of shack, odd bits of wood nailed together and covered with a tarpaulin. There is a gas burner heating it and toddlers’ scribblings on the wall, possibly by the great-grandchildren of the 85-year-old Latvian proprietor, Vladimir Egozov.

As my train pulls into Berlin Ostbahnhof I tremble as I open the train door. Then I dash down the stairs and out the north exit and into the square overlooked by what was once a Centrum Warenhaus, East Germany’s department store chain.

Five minutes later I sit hunched over a steaming, mismatched, chipped bowl of Pelmeni doused in broth and piled with fresh herbs, adjika (a hot, Georgian tomato-pepper sauce) and sour cream, as Vladimir tries to talk me into opening a franchise in Munich. 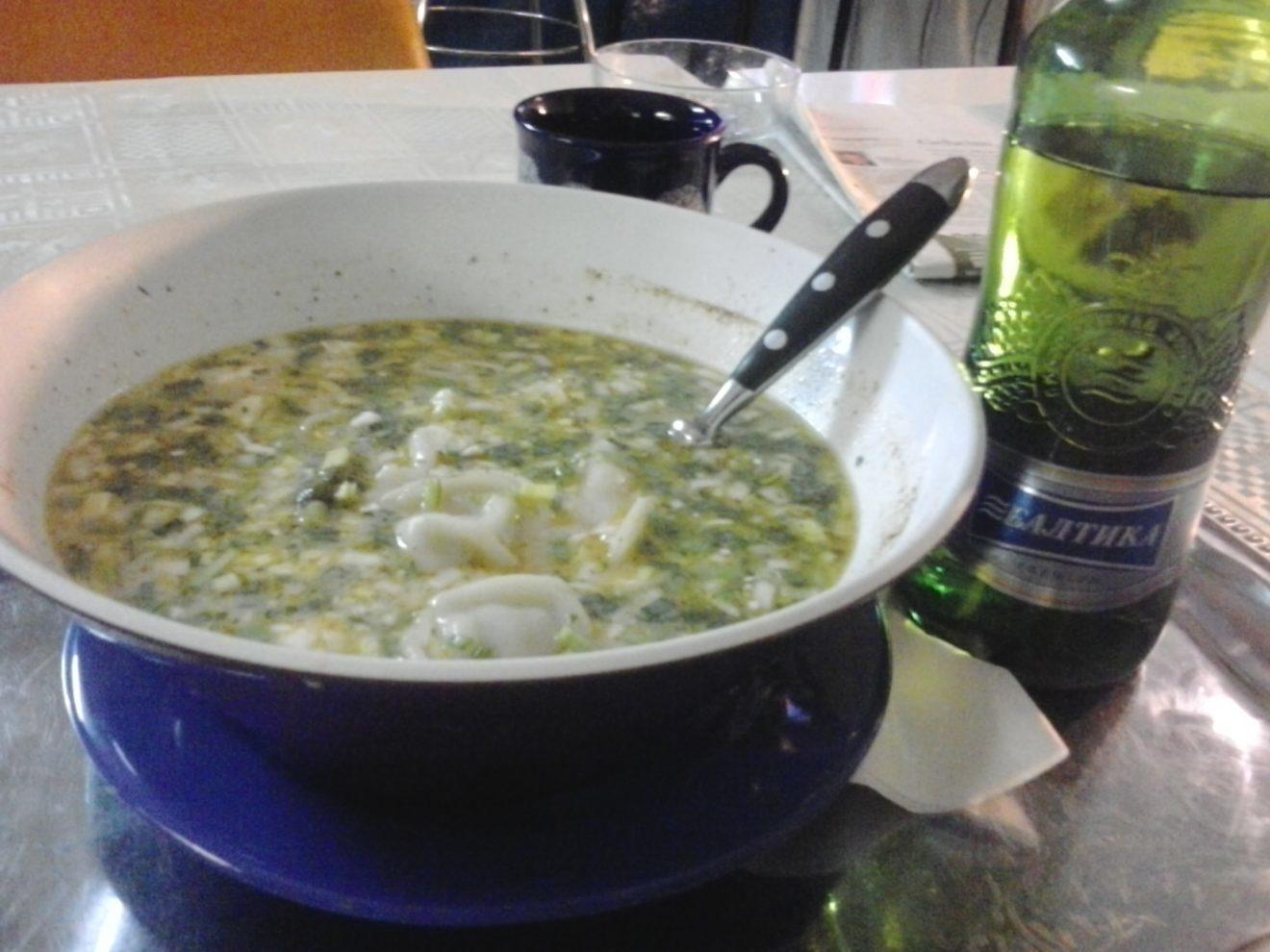 The food is absolutely mind-blowing. The shack creaks in the wind and an old CRT television blares Russian music videos.

OK, OK, I’m digressing, but I want you to know about the Edward scale so that you can follow my future food reviews.

So this post is about the Swiss restaurant car usually found in international Swiss rail services and about Elvetino, the people who run it. Elvetino is the catering company owned by SBB for servicing their trains with food. 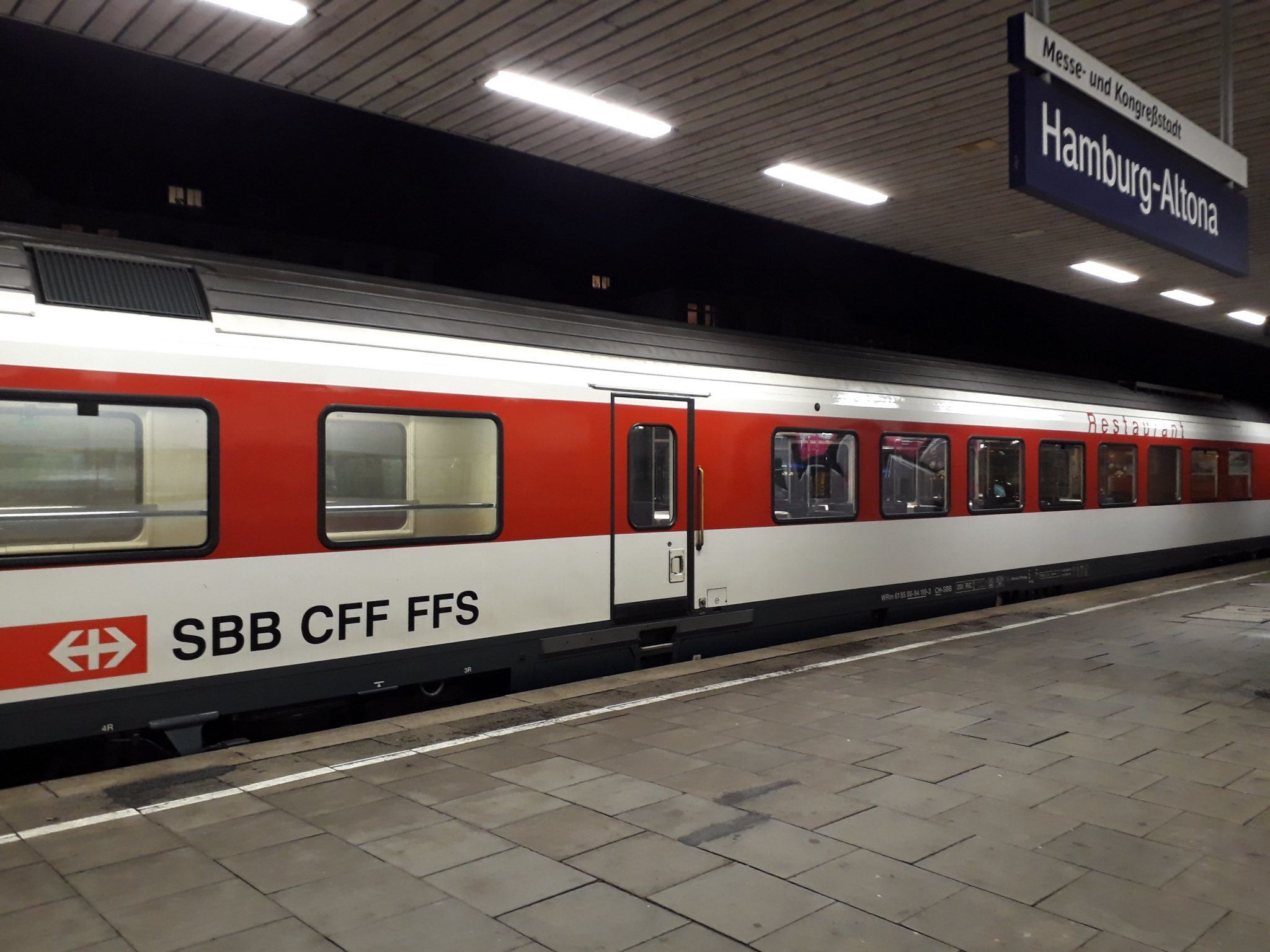 In my case, I was on EuroCity 8, which runs from Zürich HB to Hamburg-Altona. Though most of its journey is in Germany, this service is run with nice SBB coaches.

To go on a Swiss train is to enter a world in which rail travel gets the devotion it deserves. Everything works. Especially the loos. There are power outlets. Everything is clean.

Me, I’m a compartment gal. I resent that all the SBB have to offer is saloon seating. Especially after dark, when the lighting comes on and you can’t see out the windows due to the bright strip lighting. 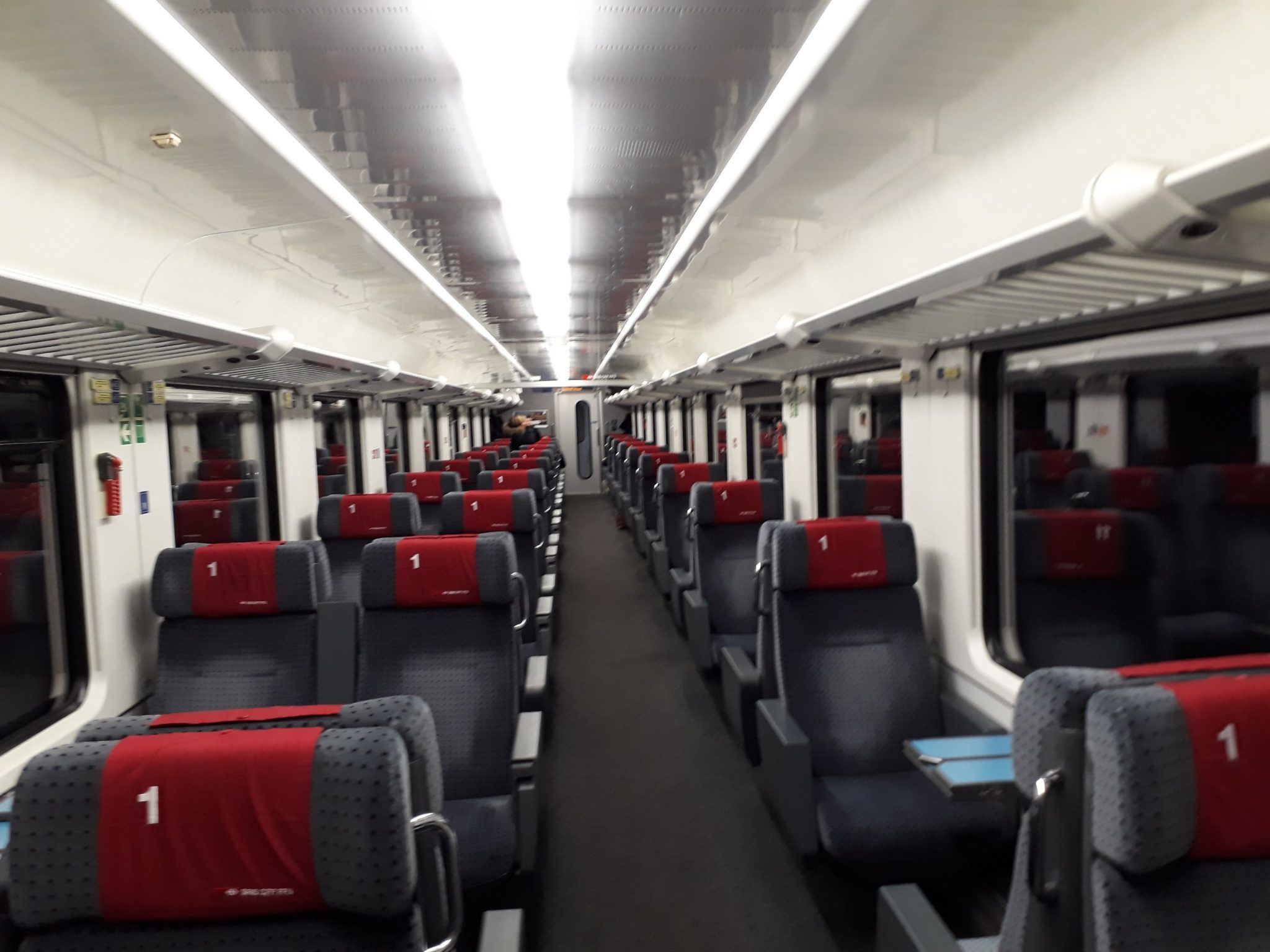 Fine during the day, but depressing at night: saloon seating in SBB Eurocity coaches. Is like a morgue. Best go to the restaurant car...

What is gorgeous, though, is the SBB restaurant car, even at night. Especially at night. 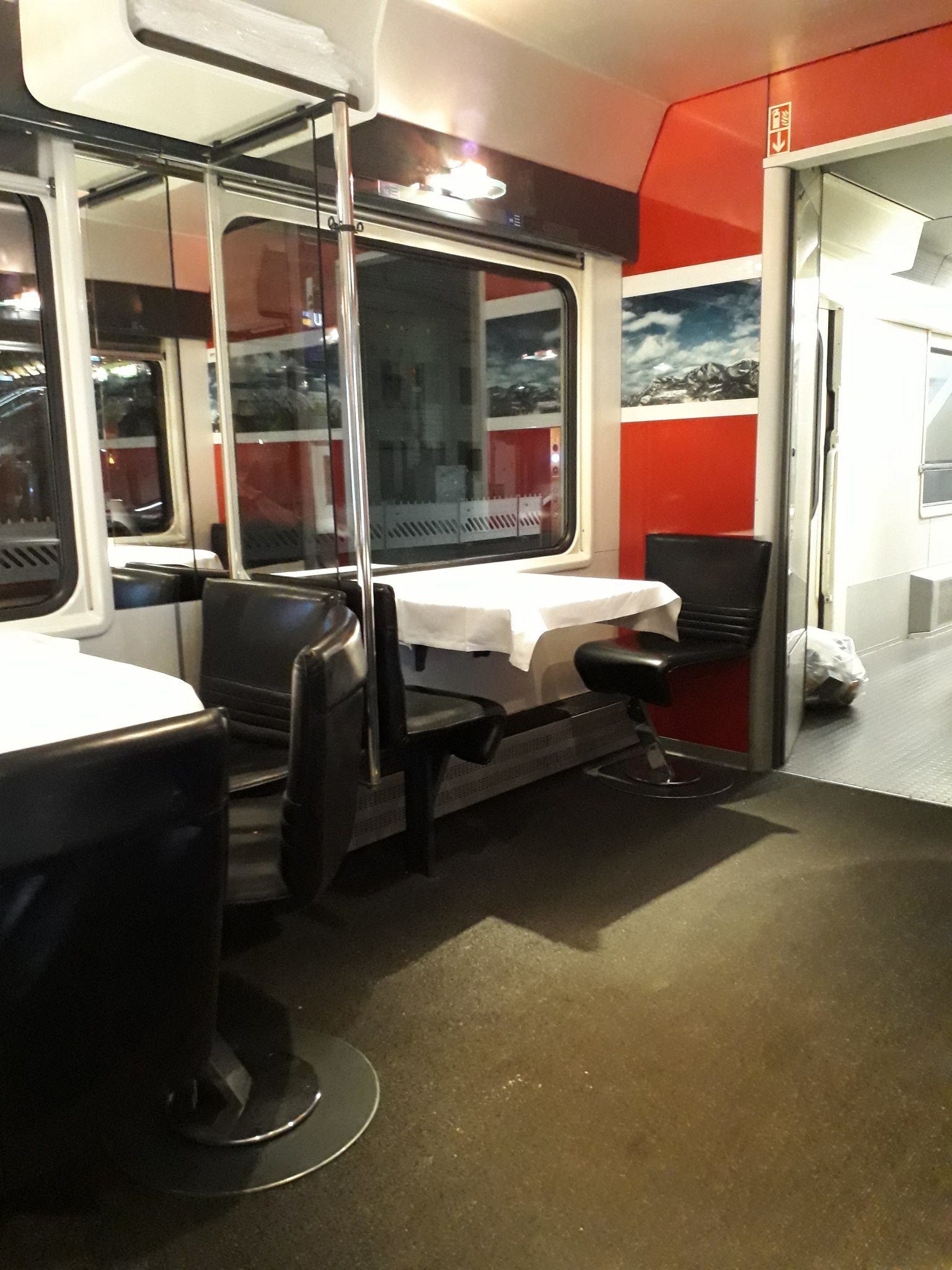 The overall atmosphere is restrained, elegant and discreet. It has heavy black, leather, movable chairs and plain white table cloths. Crockery and cutlery are china and metal respectively, and they feel opulent.

Warm, emmolient spotlights instead of the cold, morgue striplighting everywhere else on the train. All the tables are aligned with the windows.

Everyone talks in murmurs. The waitress glides about like a vestal virgin, nodding her head at whispered orders. Germans come and are in awe. In such awe in fact that they pay €5.00 for a tin of insipid Feldschlösschen beer without complaining.

The menu is equally restrained and elegant, and surprisingly unpretentious. There is choice, but not too much. 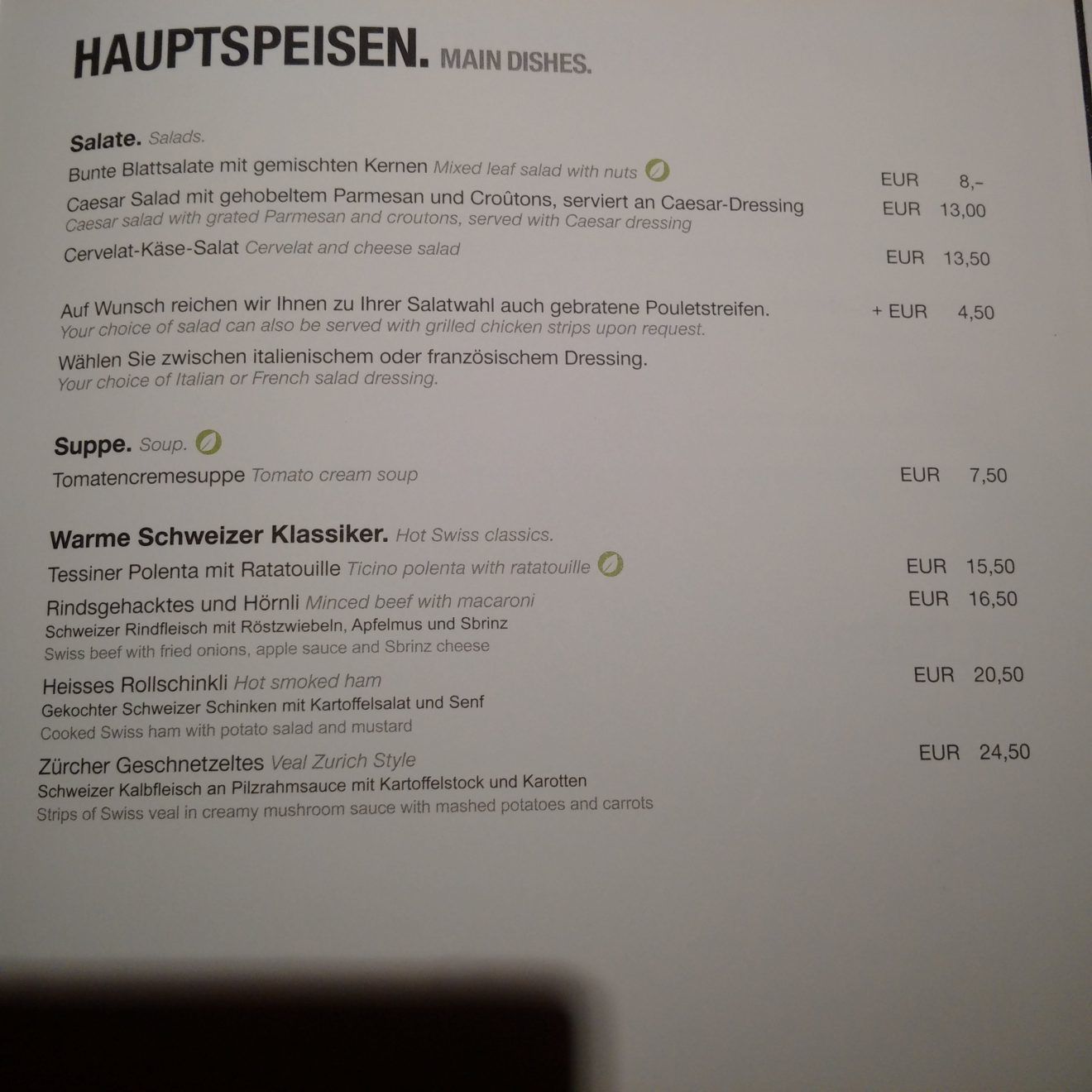 The main courses on the menu in the Swiss restaurant car

All classic, salt-of-the-earth Swiss food, with meat, without, and even vegan. Not the ostentatious seitan vegan, where the worse it tastes the holier it makes you. Just food that happens to be vegan.

Some appetizers and salads, some main courses, some puddings. Some hot and cold drinks, and that is it.

I spent almost six hours in the SBB dining car. I got on at Koblenz, where I live at the moment, and stayed all the way to Hamburg.

I kicked things off with some fancy beer from Ticino. Craft, artigianale and all that. Read: expensive. Apart from the permanent selection of beers Elvetino have a constantly changing offer of regional Swiss special beers. This is what I went for. 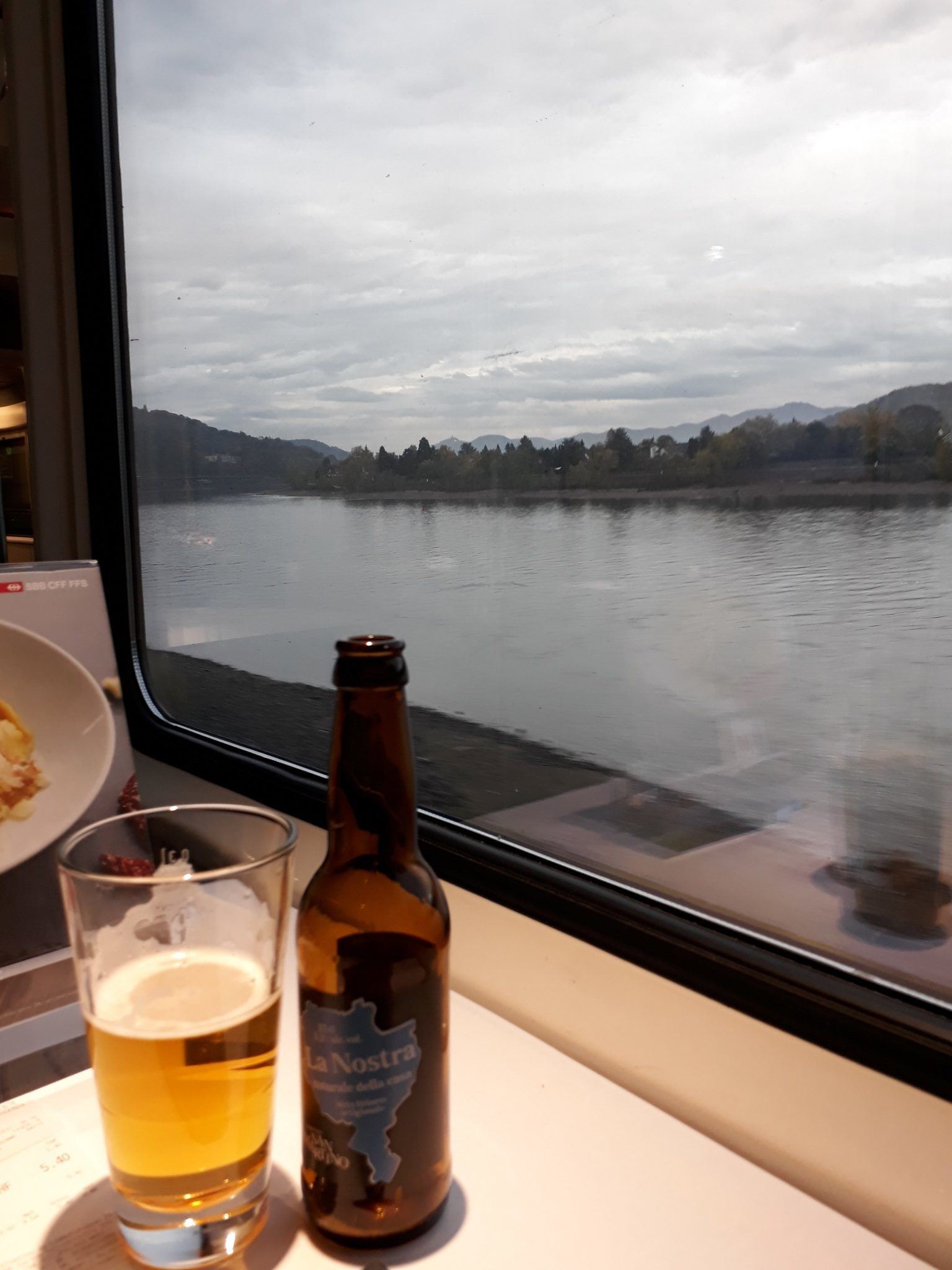 I had had this beer a couple of weeks before, had wanted to hate it but loved it. Afterwards I had opened the Ukrainian Obolon’ Zhihulivs’ke beer that I had brought with me - which I had wanted to love but hated. My days of drinking warm beer from 1 liter plastic bottles are over.

The standard beer in the SBB restaurant is Feldschlösschen from a 0.5l tin. Feldschlösschen tastes like Swedish supermarket beer - weak and bland. Better to pay a tiny bit more for much better beer.

I drank it slowly and soaked up the atmosphere as the train twisted along the Rhine. The sun was already setting, and it bathed the tables in shimmering orange light. Just before Cologne I decided to stay and have something to eat. I promised myself I would write a review for it on the blog, to justify the indulgence. 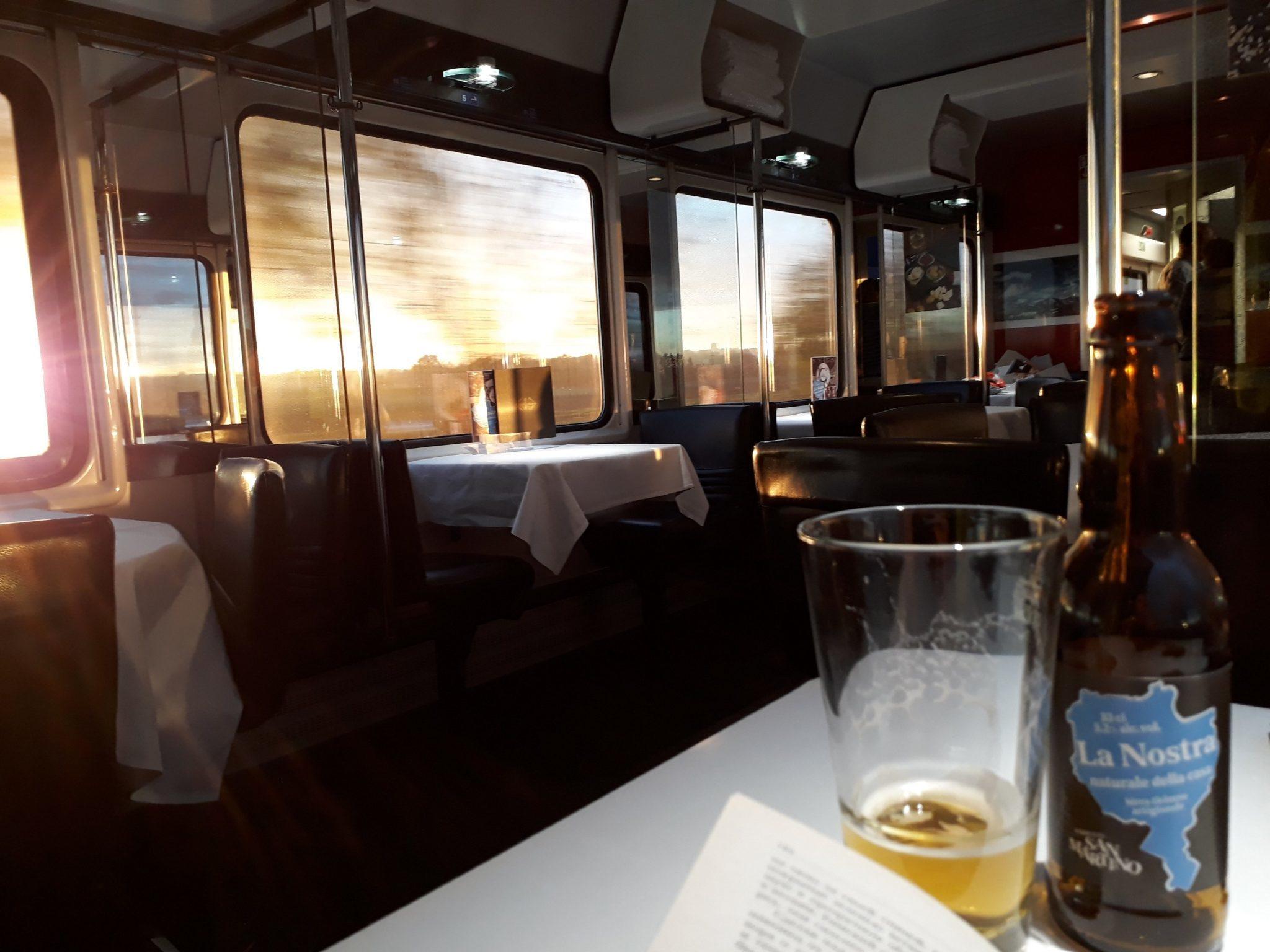 As a main course I ordered the Polenta with Ratatouille and another Ticino beer. The Vestal Virgin had made me pay straight away for my first bottle (which I resented), but now she saw I meant business and brought everything else I ordered and merely added it to my bill.

The Polenta took reassuringly long to come. I didn’t dare look to see if there was a microwave. Obviously, this stuff is cooked off the premises. It is not food, it is catering. But it is good. Most probably it was warmed up in a steamer. It was properly hot through and showed no tell-tale signs of having been microwaved. Fantastic. 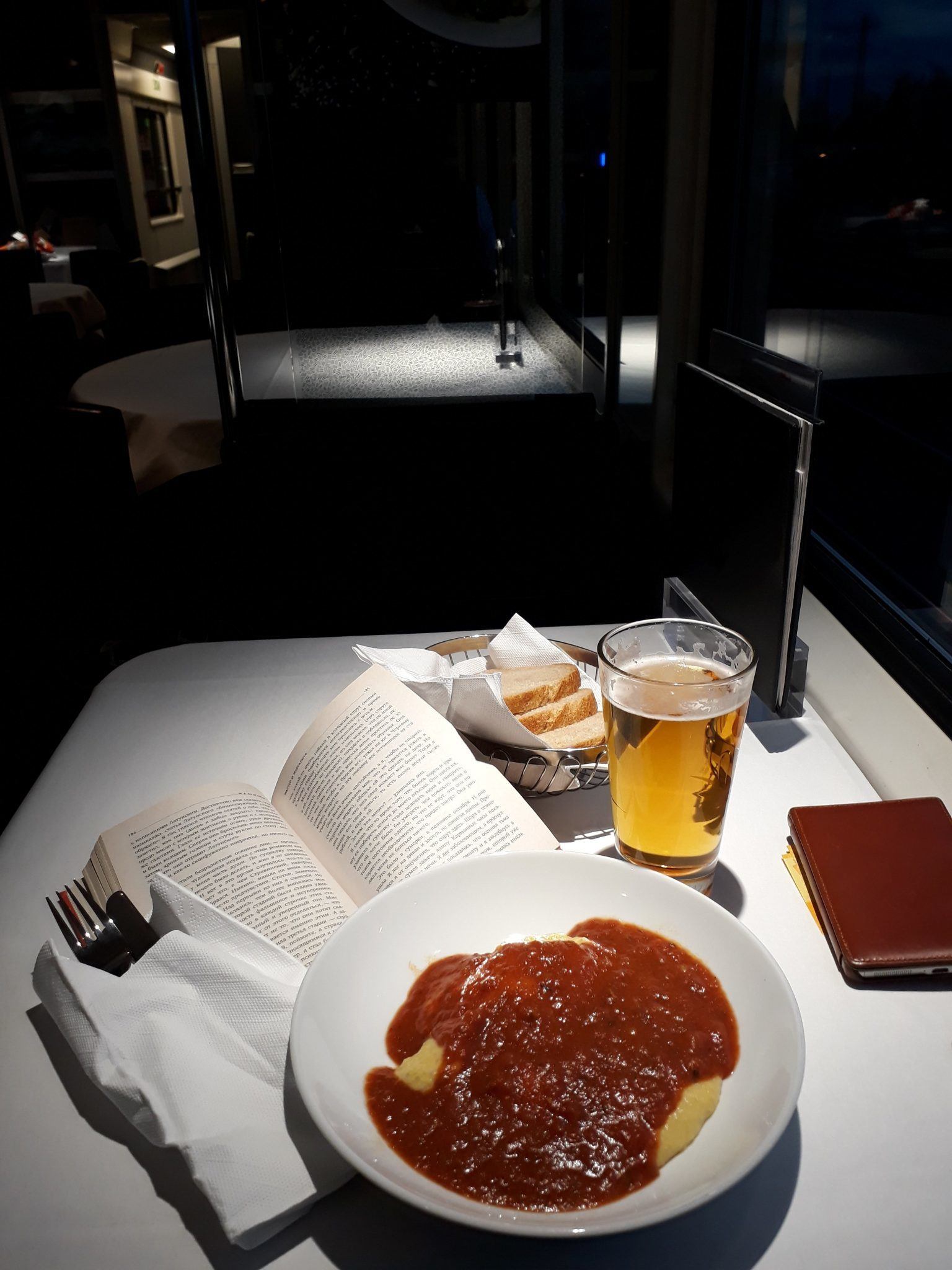 It tasted great. The polenta was nice and maizey, soft but grainy, and the Ratatouille was sweet and tomatoey. The whole thing was well balanced and very satisfying. The beer went very well with it.

I don’t remember what happened then, but what I do know is that I must have read the menu again and ordered the “panna cotta with raspberry coulis”.

Somehow, the Swiss manage to use French without sounding pretentious.

Anyway, I couldn’t resist it. I had an espresso to go with it and it came in a proper china cup and was also just right. Strong and smokey and not at all bitter. 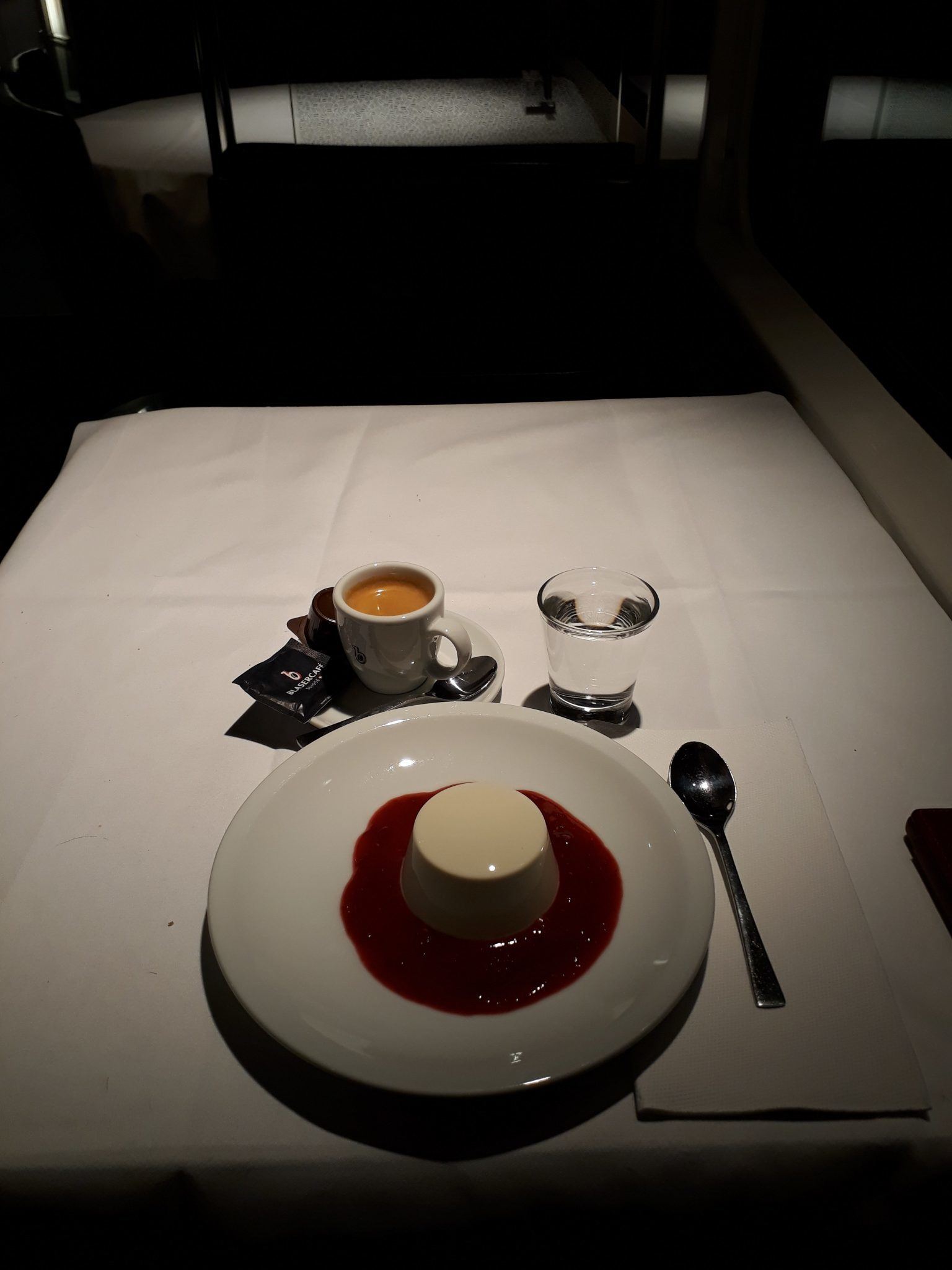 By now it was past 9 PM and the waitress had shut up shop. So I still sat in the empty dining car and watched the darkness whirl past the window.

Cheaper than a psychologist

Well, it was hardly going to be cheap, was it? I hear you already:  Yeah, Eddie, tell us, what was the damage? 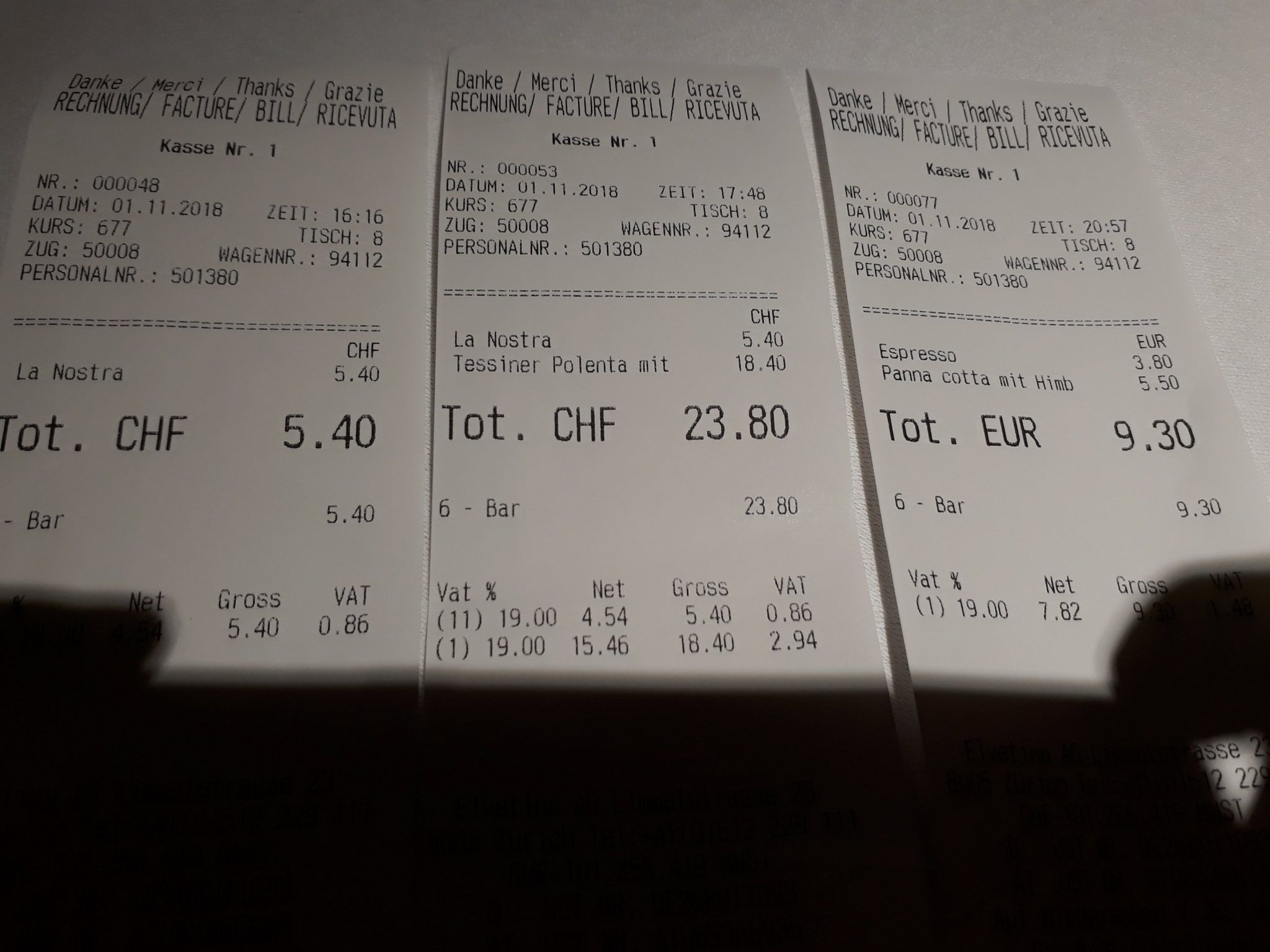 Well, I blew all 30 of my Swiss franks and then parted with some euros as well. But if you compare it with real restaurants in Switzerland, the price is OK. It isn’t cheap, but it is exquisite, so on balance, you get your money’s worth. I think.

Expect to pay between €30-€50 per person for food, drink, pudding and coffee.

The food gets seven points. Remember this is not freshly cooked, it is warmed up. But it is the best warmed up food I've ever had on a train. 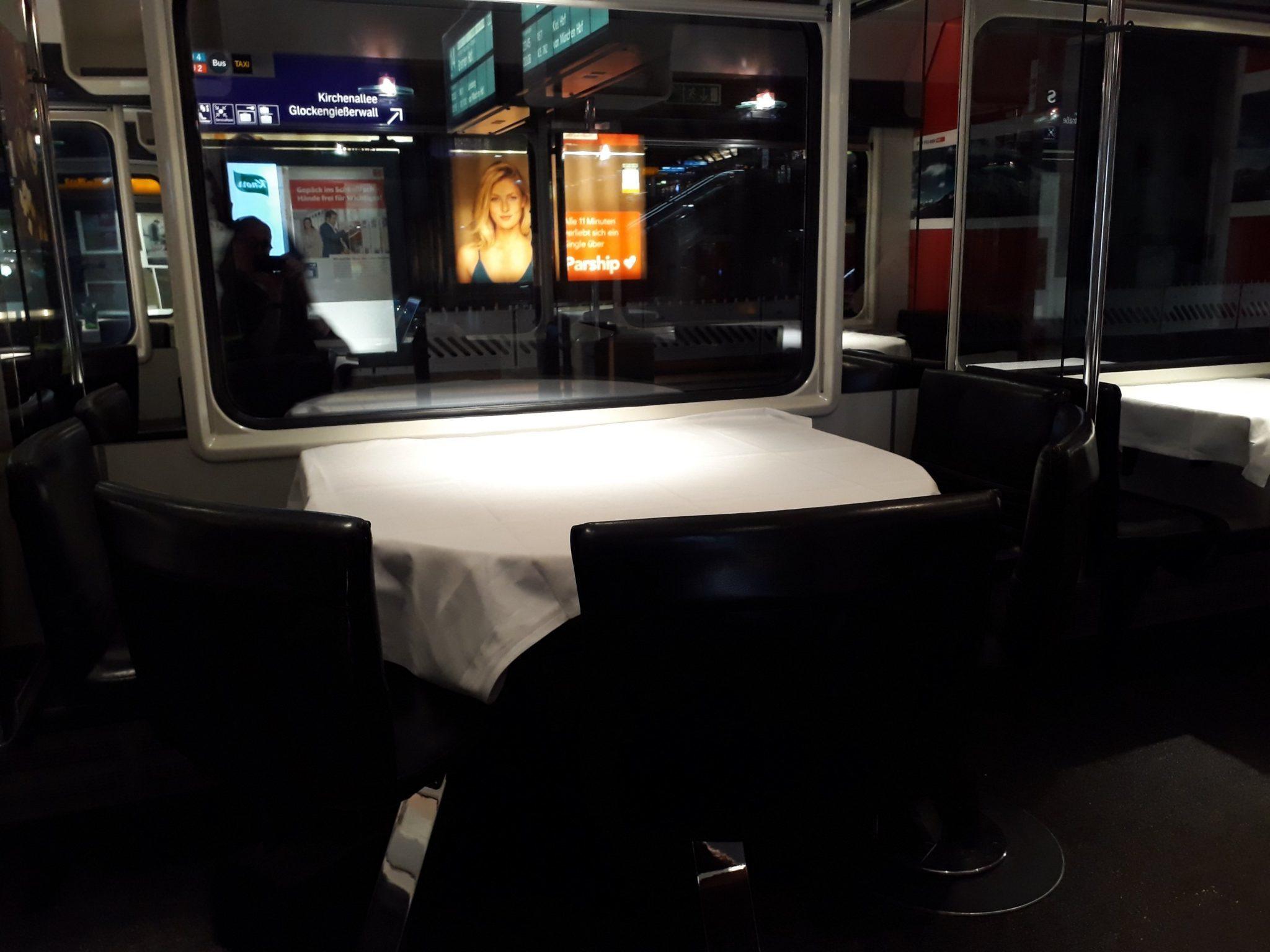 The interior gets three points - it is tables, chairs, table cloths and cutlery. Only the necessities, but Elvetino don't skimp. They have the best necessities. Otherwise the decorations are restricted to red panelling and vague mountain scenery.

So we subtract three interior points from seven food points to get four points on the Edward Scale.

Imagine this: you spend one or two hours (in my case five or six) in a sumptuous atmosphere, sitting very comfortably and watching the scenery flit by. Everyone is nice to everyone else, no one is in a hurry. It is so civilised.

A visit to the Swiss restaurant car is like a little holiday - a holiday from austerity. It is like a sojourn to some older Europe in which the small things still matter and haven't been sacrificed to efficiency and the bottom line. 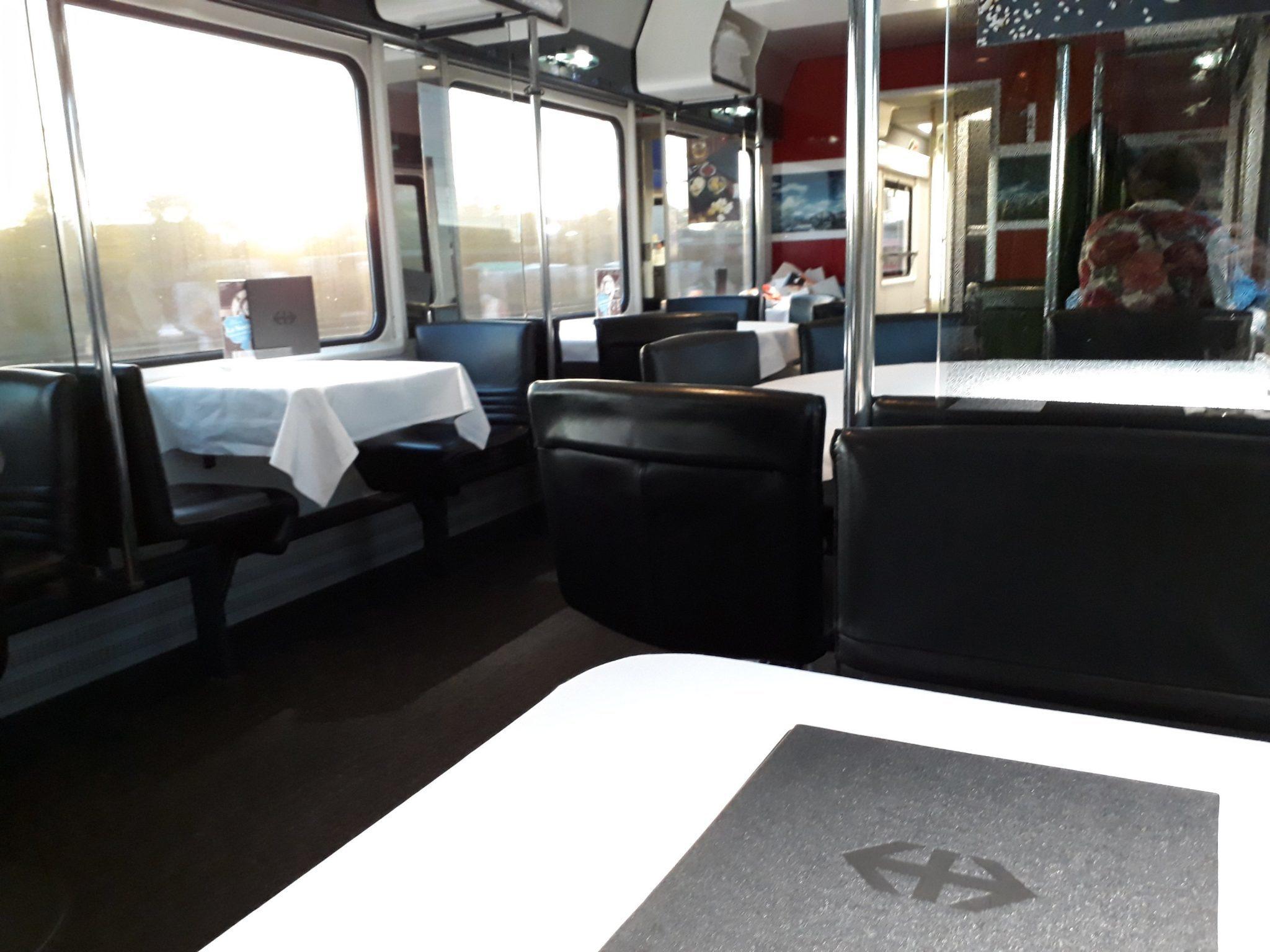 I left feeling mellow, relaxed and civilised. I had been feeling depressed about the impending five days away from home, battling with broken heatings and loos on the Flixtrain. This made me feel better than any psychologist could have done.

As I wrote in my rapturous tweet, you feel like you are in a more glamorous, exciting version of your own life.

So, next time on a Swiss train, plan for the restaurant car. Factor it in to your budget.

​Have a look at their current menu right here.

It may not be cheap, but it is worth it.

How to Cook your Favourite @_DiningCar Dishes At Home